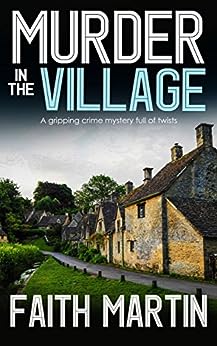 A would-be politician is found battered to death in the kitchen of his expensive home in a lovely Oxfordshire village. His wife’s alibi is full of holes and there’s another woman in the background. And what about his seemingly mild-mannered political rival?

DI Hillary Greene tries to get to the bottom of this perplexing murder. She certainly doesn’t think the prime suspect is as guilty as everyone thinks.

Just as she’s about to make a breakthrough, everything is turned upside down by a fatal development in another case she is working on . . .

Can Hillary find the murderer and will she survive a brush with one of Oxford’s most dangerous criminals?

I recently had the delight of reading and reviewing ‘Murder Of The Bride’ by Faith Martin, which is the previous book in the series featuring DI Hilary Greene, and I absolutely loved it.  So you can imagine my excitement when I was asked if I would like to read and review ‘Murder In The Village’.  Of course I said ‘yes’ and oh wowzers I absolutely loved it.  In fact I think that this series just gets better and better with each book that is released, but more about that in a bit.

DI Hillary Greene is a woman of a particular age, whose career is basically her life.  She doesn’t have anything else.  DI Greene was married to a less than savoury character and she had no idea about the true extent of his dodgy dealings until they were exposed.  Her husband is no longer around and the couple had no children.  Greene is one of those feisty female detectives, who are not easily, if ever, afraid and she does all she can to seek justice for the victims of crime and to ensure that the guilty party pays for what he or she has done.  DI Greene is popular with her team and she is  more than willing to muck in and do her fair share of the day to day work.  DI Greene enjoys a close working relationship and friendship with her immediate superior DCI Phillip Mallow, also known as ‘Mellow Mallow’.  DI Greene tells it like it is and doesn’t pull any punches and her no nonsense attitude earns her the respect of her colleagues.  That is except for DS Frank Ross, who was her ex-husband’s best friend.  DS Ross is one of those characters, who made me want to poke him in the eyes with a sharp stick before slapping him across the face with a wet flip flop and a wet fish.  DS Ross is basically a slob, who avoids work when he can, he has no respect for those in authority, he doesn’t follow procedure, he doesn’t play by the rules, he cosies up to the criminal fraternity and he tries to get up DI Greene’s nose as much as he can.  He also seems to be very much a lecherous pervert, who gave me the heebie jeebies every time he was mentioned.  How he is still a serving police officer is beyond me.

I have to say that in my opinion ‘Murder In The Village’ is brilliantly written.  As I mentioned at the start of the review, this is a series that just keeps getting better and better.  The writing style is such that you can’t fail to be drawn in to the story.  I was literally hooked from the first word on the last page and before I knew it I had got a quarter of the way through the book.  I didn’t notice either the time passing or the pages turning.  In fact the pages were turning that fast that it was almost as if they were turning themselves.  Usually I have the attention span of a gnat and I am easily distracted but not in this case, as I was able to cut out all other noise and avoid any distraction.  The writing was that good that I literally felt as though I was a member of DI Greene’s team.  I felt that I could easily have fitted right in.  Opening ‘Murder In The Village’ felt like being reunited with old friends, all apart from DS Ross that is.  Reading this book was a bit like being on a rollercoaster ride with all the twists, turns and the odd occasional stomach churning moment.  I smugly thought that I had fathomed out who the murderer(s) was/ were but I was wrong and the book sent me down another path entirely.  This is a book that certainly kept me guessing and kept me on my toes.

In short, I absolutely LOVED this book and I absolutely love this series.  I can’t wait to read more about cases involving DI Hillary Greene and her team.  Here’s hoping that I don’t have too long to wait.  I would recommend this series to anyone.  I award this book an easy 5* out of 5*.

One thought on “‘Murder In The Village’ by Faith Martin”