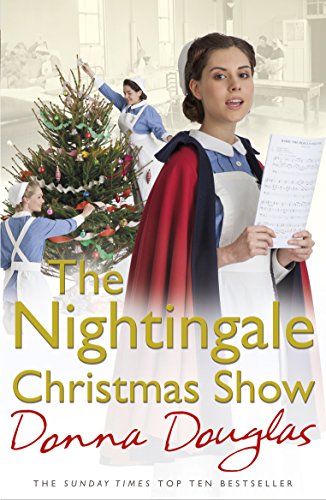 Matron Kathleen Fox has the job of putting the Nightingale Hospital back together. But memories and ghosts of those lost fill the bomb-damaged buildings, and she wonders if she is up to the task.

In the name of festive cheer Kathleen decides to put on a Christmas Show for the patients. The idea is greeted with mixed feelings by the nurses, who are struggling with their own post-war problems. And the newly-formed rivalry between newcomer Assistant Matron Charlotte Davis and ward sister Violet Tanner isn’t helping matters.

As rehearsals begin however, it seems the show isn’t just a tonic for the patients – could the Nightingale Christmas Show be just what the doctor ordered for the nurses too?

My stop on the blog tour for ‘The Nightingale Christmas Show’ is slightly different in that it comes in two parts.  The first part (this part) contains my review and the second part contains an exclusive Q&A session with Donna Douglas herself.  So without further ado here’s my review.

My review is going to be slightly different in that it is going to be a review by two people, myself (Miss GBG) and my lovely mother (Mrs. GBG).  For those of you who don’t know, Mrs. GBG is a pensioner but she is also a former nurse of thirty plus years experience.  I had all the Donna Douglas books on my shelf, one day Mrs. GBG picked one up and the rest as they say is history.  Every time I receive a book written by Donna Douglas, I have to literally wrestle and fight with a pensioner over who gets to read the book first.  Mrs. GBG always wins, which isn’t good for my ego.  Anyway I digress so back to the review I do go.

This is the ninth book in the best selling series featuring the nurses at the Nightingale Hospital.  We have loved each and every one of the series and this one is no different but I will say more about that in a bit.

The characters in ‘The Nightingale Christmas Show’ are all realistic.  Mrs. GBG particularly found the Matron and the Ward Sisters to be authentic and made her reminisce about what the Matron and Ward Sisters were like when she did her training at DMH.  Donna perfectly captured the sense of fear that the staff nurses and student nurses had when they knew that the Ward Sisters and/ or Matron were about.  Mrs. GBG said that all nurses can relate to having worked for someone like the Assistant Matron, a Miss Charlotte Davis at the Nightingale Hospital.  She is an absolute nightmare and she is never satisfied with anything.  She always has to pick fault and never seems to give compliments out.  She is a lover of romance novels and in one author in particular but she doesn’t let on to anybody.  The Assistant Matron assumes control of organising the Christmas show for the patients of the Nightingale Hospital.  However, the show does not get off to a great start because she successfully manages to alienate those volunteering for the show.  I wondered which charm school she went to because she really did need to get a refund.  However, something happens, which could lead to a thaw in her personality but as to what happens, well you are just going to have to read the book for yourself.    I loved the character of Peggy, who is a volunteer on the Childrens Ward.  She is married to a rather unpleasant character and not only does she live with him, but she also has to put up with her sister and her mother in law.  Nothing Peggy does ever seems to be enough or to be right.  In fact her home life is hell and I really felt for her because her home life seemed pretty much like a prison sentence.  I was so rooting for her to see the light, tell her husband, sister and mother in law what for and to leave them all to be miserable together.  Peggy deserves so much more than that miserable lot.  As to whether or not she manages to do that well you are just going to have to read the book for yourself.

We both agree that ‘The Nightingale Christmas Show’ is superbly written.  It’s written in a slightly different way to the other books in the series in that each chapter focuses on one character in particular and it is written from their point of view.  This really works and it isn’t confusing.  Reading ‘The Nightingale Christmas Show’ became seriously addictive and once we picked the book up, we found that we just couldn’t put it down.  We had to read on and on to see what happened to the characters and if they were going to find their happy ever after.  We were gripped from the first word on the first page and before we knew it we had finished the book, which we were both so disappointed about, because we were enjoying the book so much that we just wanted the story to continue.  The pages were turning that fast that it was almost as if they were turning themselves.  Donna Douglas clearly cares about her characters and what happens to them, which really does come across in her writing.  Reading this book felt like reuniting with old friends.  I became so absorbed in the story that I felt as though I was an invisible witness to everything that was happening on the wards and as though I had dived into the pages.  I really did feel as though I had been through the emotional wringer after I had finished the book with all the feelings of hope, despair, joy, happiness and sadness and well you get the picture.  Ultimately what I will say is that the ending to the book left both me and Mrs. GBG with a smile on our faces but that is all I am going to say.

In short, we totally and utterly loved reading ‘The Nightingale Christmas Show’ and we can’t wait to see what comes next from the hugely talented Donna Douglas.  We would recommend this series and this author to anybody and everybody.  We award this book 5* out of 5* but we would have awarded it more stars if we could have because we really did enjoy the book that much.