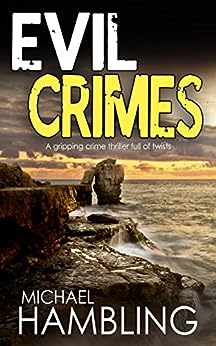 A young man’s body is spotted in the stormy sea off Dancing Ledge in Dorset.

Did he lose his footing in the gale force winds and fall in? Or is there a more sinister cause of death?

Is the young woman as evil as she seems or is someone else manipulating her?

DCI Sophie Allen races against time to uncover the tragic secrets behind the crimes and stop any more deaths.

Okay dokey folks I have a confession to make.  Although I have all of Michael Hambling’s books on my ever increasing and dangerously teetering ‘TBR’ (to be read) pile, I haven’t actually read one before.  Please don’t hate me.  When I was asked if I would like to take part in the blog tour for his latest release ‘Evil Crimes’, I grabbed the opportunity because it meant that I could familiarise myself with his work.  Boy oh boy am I glad that I did because I now realise just what it is I have been missing out on.  I LOVED this book but more about that in a bit.

DCI Sophie Allen is one likeable police officer.  She’s in her forties and lives at home with her husband.  They seem to get on really well , which seems like a rarity in crime novels.  DCI Allen is considered to be the font of all knowledge as regards violent crime and murder within the Dorset area.  Something for which she is very well qualified to be.  DCI Allen holds a degree in law but uniquely she also has a Masters degree in criminal psychology.  She can say what makes criminals tick but she also knows the law and how it can punish the perpetrators of crime.  Sophie Allen is the sort of boss that I would  want to work for- she is kind, supportive, always ready to lend an ear to those who need it, she’s ready with tea, sympathy and advice, she doesn’t hesitate to stick up for members of her team when the need arises but she also comes down hard on those members of her team, who screw up.  DCI Sophie Allen is like a mother hen and her team are her chicks.  Sophie is one heck of a strong woman.  It’s obvious that she has secrets in her past but she tries not to allow them to affect her present day or future.

I have to say that the villain in this story is somewhat chilling and I could not believe the ease with which she or he sought out a victim and how they managed to get the victim under their spell.  The villain displayed a chilling indifference to his/ her victims and I couldn’t believe the ease with which the villain managed to blend in to society.  I guess this book shows that you can’t take anybody at face value and you don’t know what lurks beneath the surface.

Every once in a while I discover a new author, I read their book, I find out just what it is I have been missing all these years and I can’t understand why I haven’t read their work before.  Well I felt this way about ‘Evil Crimes’ and it’s author.  Rest assured that now I have discovered just how good this author is, reading the rest of his books is now a priority.  I was hooked from the very first word on the very first page and I was enthralled until the last word on the last page.  It was almost as if the book had cast a spell on me.  Usually I have the attention span of a gnat and I am easily distracted when I read a book but not in this case.  Once I picked up ‘Evil Crimes’ that was it, I just became addicted to reading it.  It was almost as if my Kindle became glued to my hand as the book went everywhere with me.  I was that into the story that I didn’t realise how quickly the pages were turning and before I knew it I had finished the book, which I had mixed feelings about.  Don’t get me wrong, I was pleased to finish the book as I knew how the story ended but I was enjoying the writing style and the story so much that I just wanted it to continue.  I liked the way that the author places more emphasis on the psychological aspects of crime and not the blood and guts aspect.  You really get a sense of what makes a criminal tick, which I found so very interesting because my dream job is being a criminal psychologist.

In short I loved this book and I can’t wait to read what comes next for DCI Sophie Allen and her team.  In the meantime though, I will just content myself with catching up with the previous books in the series.  I would definitely recommend this author and his books to anyone.  The score on the Ginger Book Geek board is an easy and very well deserved 5* out of 5*.