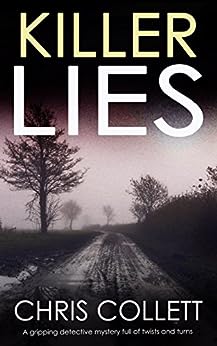 Just when DI Tom Mariner seems to be settling down with his new girlfriend . . . everything kicks off.

First, a badly decomposed body of a young woman is found in a Birmingham sewer. The police can’t identify her and dub her “Madeleine.”

Then an important politician and his wife are shot on an isolated road. “Vengeance is mine” is scrawled in blood at the scene.

And finally, a bomb explosion in the busy city kills five people, causing chaos and panic.

Can Detective Mariner and his team get to the bottom of crimes that will come very close to home for him and his team?

Mariner will need to bend the rules and risk everything to get to the truth. And in a thrilling conclusion, his own life will be threatened.

I discovered the series featuring DI Tom Mariner towards the end of last year and I was thrilled to learn that there were more books in the series to come.  Even better was the fact that I was asked if I would like to read and review ‘Killer Lies’ as part of the blog tour.  You can imagine my excitement although on seconds thoughts best not.  The happy dance was not pretty.  Anyway I digress slightly so back to the review I do go.

I must admit to having something of a soft spot for DI Mariner.  He is a dedicated policeman, who has issues but he is trying to work through them.  He has a few close friends but I get the impression that quite often he would be happy to be on his own.  This book sees him discussing the next step with Anna, who is his significant other.  Anna wants to move in together and have a baby, which Mariner doesn’t appear all that keen about.  I did wonder if that was related to his own childhood.  He was brought up by his mother but in later years they were estranged for a time.  There was no sign of father and Mariner’s mother deflected the questions about his father.  However, ‘Killer Lies’ sees Mariner discover who his father is.  It comes as a bit of a shock for him and he feels the effects for quite a while.  His biological father is somehow caught up in one of the cases mentioned in the synopsis but I don’t want to tell you which one because that would be giving away far too many spoilers.  ‘Killer Lies’ sees Mariner and Anna go through a very traumatic event, as there is an explosion in the church, where the police carol service is going to be held.  Mariner tries to help a young girl but to no avail as she dies.  Her face haunts his thoughts and dreams for months afterwards and quite understandably too.  The explosion makes Mariner very jumpy and he is over cautious when it comes to security for him and his loved ones.  Again this is quite understandable.  Mariner is a typical man in that he doesn’t like talking about his feelings or about his mental health, as that would be seen as an admission of failure.  From the description of symptoms given, I would go so far as to say that Mariner is suffering from PTSD (Post Traumatic Stress Disorder).  DI Mariner likes to investigate fully and if something doesn’t sit right with him, then he won’t settle until it has been sorted, investigated or discounted.  Will Mariner have a relationship with his new found family?  Will Mariner get to the bottom of who targeted the politician and why?  Will Mariner discover the cause of the explosion and why?  Well for the answers to those questions and more you at just going to have to read the book for yourselves as I am not going to tell you.

To say that reading ‘Killer Lies’ is addictive has to be the understatement of the week, in fact the understatement of the month!!  I was gripped by the story from the very first word on the very first page.  I basically couldn’t put the book down from the moment I picked it up and I just read all day.  I didn’t notice how quickly the time and the page numbers were flying past.  Before I knew what was happening it was dark and I had finished the book.  Usually I am easily distracted whilst I read but not in this case.  The story hits the ground running and maintains the pace throughout.  Within a short space of time we have a discovery of a body in the sewer, the assassination of a politician and his wife as well as his chauffeur and to crown it all, there is an explosion in the church.  I was so not expecting the explosion to happen and when I read about it, I certainly felt that it was an OMG moment.  I literally couldn’t believe my eyes and I almost had to read through my fingers as I dreaded what was going to happen next.  ‘Killer Lies’ took me through a whole range of emotions, from happiness to sadness, from hope to despair, from excitement to dread, from courage to fear and well you get the picture.  I really felt as though I had been through the emotional wringer and I was in need of a bit of ‘recovery time’.  ‘Killer Lies’ certainly left me with a book hangover- bookworms will know exactly what I mean by that.

In short, I totally, utterly and absolutely LOVED reading ‘Killer Lies’ and I can’t wait to read more books in the series featuring DI Tom Mariner.  Here’s hoping that we don’t have to wait too long.  I would definitely recommend this book, series and author to anybody.  ‘Killer Lies’ was certainly one hell of a book.  The score on the Ginger Book Geek board is an easily well deserved 5* out of 5*.