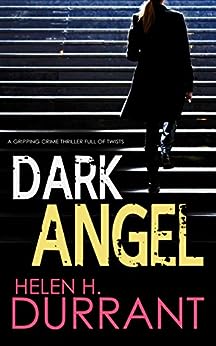 Two young men break into an expensive house in Cheshire. They take money and jewellery — and a large amount of heroin. Within twenty-four hours they are found brutally murdered.

The killings have all the hallmarks of a local drug baron. The two victims were also “angels” helping in a community project which seems to have been lowering the crime rate in the area.

But not everything is as it seems. Who is the mysterious ice-cold blonde woman who seems to be at the heart of the case?

Meanwhile, Detective Stephen Greco’s colleague and on-off girlfriend Grace is pregnant. He isn’t sure how he feels about this, and they haven’t told the boss.

And just when Greco seems to have cracked the case, new information comes to light which threatens to change everything.

I have a confession to make.  (This is fast becoming a habit.)  Although I have all of her books waiting to be read on my Kindle, to my shame I have never read one of them.  After finishing reading ‘Dark Angel’ , I now realise just what it is I have been missing all this time and I fully intend to read all her books as a matter of urgency.  (Happiness is discovering that you have found an author you love and realising just how many books there are in their back catalogue so to speak).  My only thought on finishing the book was ‘Wowzers what a read that was’ but more about that in a bit.

Detective Stephen Greco intrigues me at times but he also infuriates me at times.  He is a dedicated police officer, who likes nothing better than to see a case through from start to finish and to see a satisfactory conclusion to said case.  As is so often the case with lead male detectives he has suffered a fair bit of trauma over the years.  He was married but sadly his wife, who I get the impression was the love of his life, passed away, leaving Greco to bring up their young daughter.  Greco copes well with the demands of the job and with being a single father, but he is ably assisted by his Aunt, who steps in to do the child care when Greco is at work.  I get the impression that Greco is well respected as a superior officer/ manager but what also stands out is the fact that rather than just dishing out the orders and sitting in his nice, warm office, Greco is more than willing to muck in and do his fair share of the work.  Greco has his teams’ backs and knows that they would do the same for him.  The one area of his life, that infuriates me just a bit, is his love life.  He has an on/ off relationship with Grace, a member of his team.  So already there’s a black mark against his name, and he has failed to notify the top brass about this relationship.  Not only is he in a relationship with Grace, but she has fallen pregnant, which has not gone down well with Greco.  Grace thinks that the pregnancy marks a new chapter in their relationship but Greco reacts as if it is the end of the world.  I get the impression that he doesn’t see a future with Grace and he doesn’t want the baby.  I so wanted to jump inside the pages of the book to slap him across the chops with a wet flip flop several dozen times in annoyance at the way he treats Grace.  To quote a certain talk show host ‘if he didn’t want to risk a pregnancy then he should have put something on the end of it’.  After all it takes two to tango and all that.  I think that Greco unfairly compares Grace to his late wife, which is not helpful at all.  This latest case certainly has Greco and his team chasing leads all over the place.  Will Greco and his team solve this terrifying case?  Will Greco and Grace make a go of things?  Well for the answers to those questions and more you are just going to have to read the book for yourselves to find out as I am not going to tell you.

To say that this is an addictive, fast paced thriller has to be the understatement of the year.  The story hits the ground running and maintains the pace throughout.  The book opened in such a way that I immediately became addicted to reading it.  I just had to read on to see how the case developed, why the murderer was killing, if the murderer killed anybody else and if he or she could be apprehended before he or she claimed too many more victims.  Before I knew it I had read a third of the book but because I was enjoying reading it so much, I didn’t realise just how quickly the pages were turning and the time was passing.  Reading ‘Dark Angel’ was certainly a distraction for me and helped me to take my mind off an impending medical appointment, that I was not looking forward to.  By the time I had finished reading ‘Dark Angel’ I really did feel as though I had been on one heck of a rollercoaster ride with lots of twists, turns and plenty of stomach churning moments and moments where you just wanted to put your hands over your eyes because you fear what is going to happen next and you just want to block it out.  There were definitely times when I almost felt as though I had to read through my fingers because I was dreading what was coming next but I also knew that I had to read on if I wanted to find out what happened.  I must be a sadist!!  Some of the descriptions of how the bodies were mutilated were rather gruesome and I won’t look at fingers in the same light again!!

In short I absolutely loved reading ‘Dark Angel’ and I can’t wait to read what comes next from the bestselling and hugely talented Helen Durrant.  Happily, I have rather a lot of her books to catch up on before her next release.  I would definitely recommend this author and her books to anybody.  The score on the Ginger Book Geek board is a well deserved 5* out of 5*.

One thought on “‘Dark Angel’ by Helen Durrant”