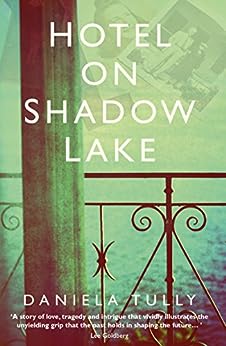 When Maya was a girl, her grandmother was everything to her: teller of magical fairy tales, surrogate mother, best friend. Then her grandmother disappeared without a trace, leaving Maya with only questions to fill the void.
Twenty-seven years later, her grandmother’s body is found in a place she had no connection to.
Desperate for answers, Maya begins to unravel secrets that go back decades, from 1910s New York to 1930s Germany and beyond. But when she begins to find herself spinning her own lies in order to uncover what happened, she must decide whether her life, and a chance at love, are worth risking for the truth.
My Review
I read the synopsis for this book and before I even got to the end of the synopsis, I had decided that this was one book that I simply had to read. I really enjoyed reading ‘Hotel On Shadow Lake’ but more about that in a bit.
I really felt for the character of Martha, Maya’s beloved Grandmother.  She grew up in the 1930s in a Germany that had been taken over by the Nazis and she had to attend groups that she had no interest in.  Martha was not a fan of the Nazis but she couldn’t really express her opposition out loud because the penalties would have been lethal.  Martha is horrified at what is taking place in the land of her birth.  What she finds even more horrifying is the fact that her own brother has become one of the state sponsored thugs, beating up anybody and anything in their way.  I also felt for Martha’s mother who was in the middle between a daughter strongly opposed to the regime and a son, who was all for the regime.  No wonder the poor lady suffered.   When we meet Martha again in the 1990s she has made a new life for herself.  However, her new life is shattered when she receives a letter that had been held up in the mail for over 40 years.  A few years later in the present day Maya decides to investigate her grandmother’s life, disappearance and death.  Who was the letter from and why does it have such an effect on her?  Why was Martha’s body found in a place that she didn’t have any apparent connection with?  Will Maya ever be able to unravel the mystery?  Well for the answers to those questions and more you are just going to have to read the book for yourselves to find out as I am not going to tell you.
This book appealed to me on so many levels.  I am a history geek as well as a book geek and I love learning about all things German.  I studied history to A-Level and went on to do a university degree in German.  A large part of my A-Level course was learning all about the Nazis as was part of my degree and I had to read some horrific accounts of opposition to the Nazis and I watched some of the horrific Nazi Propaganda films.  So I definitely had a sense of how brutal the regime was but following Martha’s story in ‘ Hotel On Shadow Lake’ makes it somehow seem more real and personal.  Instead of just learning facts and figures, you learn actual detail.   Of course I loved all the German words and I enjoyed reading them out loud as it meant I could use my very rusty German pronunciation, which has lain dormant for well over a decade.  Another major draw for me with this book, was the fact that the story is based on the own author’s family history, which she has written about with such great care and sensitivity.  Yet another of my passions is family history and I am always interested in what other people manage to turn up in their tree.  I haven’t discovered anything as poignant as this story in my own family history- yet.
To say that reading ‘Hotel On Shadow Lake’ became a serious addiction is an understatement.  The author’s writing style is such that you can’t fail to be drawn in by the end of the first page and because you need to know what happened, why and to whom, you just keep reading and reading.  Once I picked up the book, I found that I just could not put it down and my Kindle came everywhere with me.  The pages were turning that quickly that they were almost turning themselves and before I knew what was happening I had finished the book, which I was so disappointed about.  The author writes about such tragic events with such care, sensitivity and attention to detail that even I (who is not usually affected by things I read) felt a lump in my throat.  The character that will stay fresh in my mind for a long time to come, is that of Martha.  There were numerous times when I so wanted to jump into the pages of the book to help her or provide a comforting word.  The descriptions of places in Germany were so vivid that it made me want to visit Germany as soon as I can.
In short, I really did enjoy reading ‘Hotel On Shadow Lake’ and I would have no hesitation in recommending this author and her book to anybody and everybody.  It is certainly a lesson in how Nazism could divide a family.  The score on the Ginger Book Geek board is a well deserved 4* out of 5*.