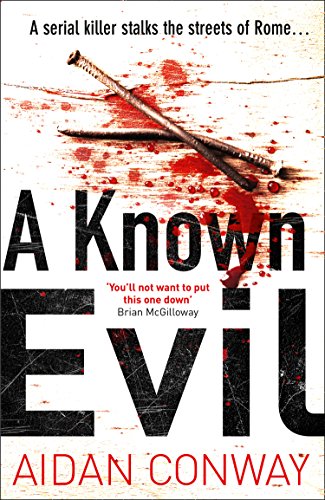 A city on lockdown.
In the depths of a freakish winter, Rome is being torn apart by a serial killer dubbed The Carpenter intent on spreading fear and violence. Soon another woman is murdered – hammered to death and left with a cryptic message nailed to her chest.

A detective in danger.
Maverick Detective Inspectors Rossi and Carrara are assigned to the investigation. But when Rossi’s girlfriend is attacked – left in a coma in hospital – he becomes the killer’s new obsession and his own past hurtles back to haunt him.

A killer out of control.
As the body count rises, with one perfect murder on the heels of another, the case begins to spiral out of control. In a city wracked by corruption and paranoia, the question is: how much is Rossi willing to sacrifice to get to the truth?

I read the synopsis for ‘A Known Evil’ and I was immediately intrigued.  For starters the book seemed to be just my sort of read and for seconds I like ‘visiting’ new countries via the books I read.  I have never read any books set in Italy before but I certainly have now.  It was certainly an interesting and addictive read.  I really enjoyed it but more about that in a bit.

I must admit to liking both Detective Inspectors Rossi and Carrara.  I think that it’s probably because they are maverick detectives and I like a bit of a rebel.  Rossi is certainly rather rare in the police world in that prior to joining the force, he studied to join the priesthood.  Rossi is a quiet man, who is interested in the world of philosophy and poetry and uses them as a coping mechanism to help him deal with the horrors that he has to face on a daily basis.  When Rossi is assigned to a case, he investigates to the best of his ability.  Rossi is also very intelligent and makes connections that other people might have missed.  I would love to have his sort of mind.  Rossi is moved from investigating ‘The Carpenter’ case but because he is so determined to get to the absolute heart of what is happening and why, him and Carrera investigate the matter secretly.  The case becomes personal for Rossi when his girlfriend is attacked and left in a coma.  This strengthens Rossi’s determination to solve the case, even though numerous obstacles are put in his way.  Will Rossi solve the case?  Will the murderer be apprehended before he or she claims any further victims?  Will Rossi’s girlfriend survive?  Well for the answers to that and more you are just going to have to read the book for yourselves to find out as I am not going to tell you.

‘A Known Evil’ is really well researched and written.  The attention to detail is first rate.  I didn’t realise the intricacies of the Italian legal system or the way things work over in Italy but after reading this book, I now  have a fair idea.  I loved the fact that some of the Italian language made an appearance in the book.  Although I have never studied Italian (this book geek studied French & Spanish), even I was able to get the gist of it.  The descriptions of Italy were so vivid that if I closed my eyes, I really could imagine that I was in Italy with all the relevant sights, sounds and smells.  Rome was so well described that I feel as though I could find my way round even though I have never been before.  The author’s writing style is such that I was gripped by the book by the time I had reached the bottom of the page and I was interested to see where the story went next.  As I was so eager to find out who was the murderer, I just had to keep reading on and on and on.  There were occasions where I smugly, and as it turned out wrongly, thought that I had fathomed out who was doing what and why, only to be proved wrong and sent down another path entirely.  There were definitely several twists, turns and the odd moment where you just want to shut your eyes as you fear what is going to happen next.

In short, I really did enjoy reading ‘A Known Evil’ and I would certainly recommend it to other readers.  I can’t wait to read what comes next from Aidan Conway and I know that there isn’t too much longer to wait because the second book in the series ‘A Cold Flame’ is due for release on 20th July 2018.  The score on the Ginger Book Geek board is a well deserved 4* out of 5*.