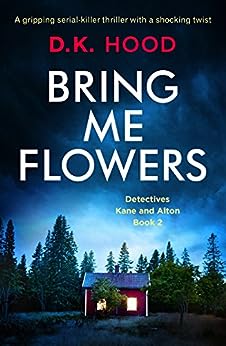 She didn’t know he was watching. Until it was too late.

She’d walked this path hundreds of times before, she knew every twist and turn. But today was different. She didn’t know someone was waiting for her, hidden away from view. She didn’t know this was the last time she’d walk this path.

Hidden deep in the forest, schoolgirl Felicity Parker is found carefully laid out on a rock with nothing but a freshly picked bunch of flowers next to her lifeless form. Detective Jenna Alton is called in to investigate the gruesome discovery.

With the body found just off a popular hiking route, Jenna believes the killer is a visitor to the town… until a second local girl is discovered.

Within days, Kate Bright, a school friend of Felicity’s, is found brutally murdered at the local swimming pool and once again, the killer has displayed his victim in a terrifying manner and left flowers at the scene.

The town is gripped with fear and Jenna and her deputy, David Kane, now know that the killer is living amongst them, and that he’s picking off school girls one by one. But they don’t know who is next on the list.

As the trail goes cold, Kane and Alton are forced to sit and wait for the killer to make his next move. But now he has a new victim in his sights, and he’s looking much closer to home …

This is the second of the books by D. K. Hood that I have had the pleasure of reading and reviewing.  The first one ‘Don’t Tell A Soul’ was released in October 2017.  I absolutely loved it and I had high hopes for ‘Bring Me Flowers’.  Boy oh boy I was not to be disappointed as it is even better than ‘Don’t Tell A Soul’ but more about that in a bit.

I absolutely loved the character of Detective Jenna Alton.  She is one tough cookie but then she has had to be.  She’s a strong female lead, who is able to command respect from the people she works with and from the people, who live where she works.  Jenna is feisty and not afraid to stick up for herself, although she occasionally gets herself into dangerous situations.  Something has happened in Jenna’s past, which meant that she had to ‘disappear’ completely.  I’m not going to type too much as to why but safe to say that it was felt her life was in danger.  Jenna found herself in Black Fall Rocks with a new identity and a new job.  Jenna gets on particularly well with Deputy David Kane, who is in hiding himself.  Jenna & Kane get on so well that it is almost as if they are married and they so make a lovely couple.  Initially I wasn’t too sure about Deputy Wolfe as he seems to be lacking somewhat in customer service and people skills.  It soon becomes clear that Kane and Wolfe know each other of sorts but I don’t want to write too much about the reasons why as I don’t want to spoil the book for others.  The characters that really made my skin crawl were the cowboys, who were in town for the rodeo competitions.  To say that they are slimeballs with a sense of entitlement is putting it mildly and politely.

As I alluded to at the beginning of this review, ‘Don’t Tell A Soul’ is good but in my opinion ‘Bring Me Flowers’ blows ‘Don’t Tell A Soul’ out of the water.  The story hits the ground running and maintains the pace throughout.  Once I started reading, I found that I just couldn’t stop and my Kindle came everywhere with me.  I was so wrapped up in the story and the investigation that I didn’t notice how quickly the time was passing and the page numbers were flying past.  By the time I looked up, I had literally cleared 33% but I genuinely had not realised.  I was hooked on the book from the moment I opened the front cover and the book didn’t release me from its grip until I closed the back cover.  I was so disappointed that I had finished the book as I was enjoying both the writing style and the storyline so much that I just wanted the book to continue.  Reading ‘Bring Me Flowers’ was very much like riding on a rollercoaster ride with lots of twists and turns and moments where you just have to cover your eyes because you fear what is going to happen next.  Whilst reading the book I even started shouting at the pages to warn the characters of imminent danger but then I had to remind myself that it was fiction and nobody could hear me.  I smugly thought that I had worked out who had done what and to whom but I was so wrong and the book took me off in another direction entirely.

In short, I absolutely blinking well loved reading ‘Bring Me Flowers’.  The series featuring Detectives Alton and Kane is going from strength to strength.  ‘Bring Me Flowers’ is one of those books that is going to stay fresh in my memory for a long time to come.  I would have no hesitation in recommending this author and the Alton & Kane series to anybody.  New readers are in for one hell of a read.  The score on the Ginger Book Geek board is a well deserved 5* out of 5*.