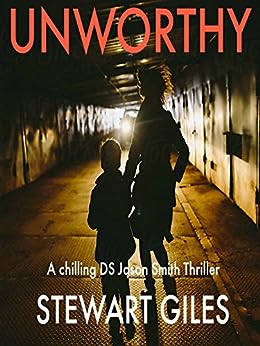 THE UNWORTHY MUST PAY.
DS Jason Smith is dragged away from paternity leave when a woman is killed with her baby in the next room. When more women with children are brutally murdered, Smith discovers that they all have something in common – they all share a secret. When he finds out that the mother of his own child is on this list of ‘Unworthy’ women, he finds himself in a race against time to stop the killer before his whole world comes crashing down around him.

Despite the fact that I have several of Stewart’s books on my ever increasing ‘To Be Read’ mountain, ‘Unworthy’ is actually only the second of his that I have read.  Boy oh boy am I glad that I read ‘Unworthy’!!  It’s a fantastic read that I absolutely loved but more about that in a bit.

I must admit that I took a little while to warm to DS Jason Smith.  He’s an ok sort of guy but at times I could have shaken him by the shoulders for the way that he behaved.  The start of the book finds him on paternity leave, after his partner Erica has given birth to a little girl.  He is enjoying having time at home to bond with his daughter and settle down into parenthood.  He is not happy when one of his team rings with details of a particularly brutal murder as he still has a week of paternity leave to go but the order for him to return has come from on high.  Not only that but Smith is a dedicated police officer, who can’t resist investigating a case when something catches their eye or sparks their interest.  This case affects Smith in particular because the dead women are all mothers, whose children have witnessed their mothers’ murders.  Smith gets on well with most of the team but two of his colleagues, who are vying for promotion are getting on his nerves slightly because they are bickering so much.  That said, Smith and his colleagues work well as a team and for the most part they have each others’ backs.  Smith is a terrible flirt and definitely has an eye for the ladies.  He takes a particular shine to one of the female police officers that is seconded to the team and there is definitely a spark between them.  The murders continue and then the case becomes personal.  Will DS Jason Smith and his team manage to identify and apprehend the killer/ killers? What happens to make the case personal?  Well for the answers to those questions and more you are just going to have to read the book for yourselves to find out as I am not going to tell you.

This book had me gripped from the moment I started reading and I found that I just couldn’t put it down.  The author’s writing style is such that you can’t fail to be drawn in to the story.  The book hits the ground running and maintains the pace throughout. I really got a sense of the desperation that the police team felt when they were chasing the killer/ killers and the despair that they felt when it emerges that the murder victims were mothers.  I guess you could say that I felt as though I was a silent member of the investigating team.  ‘Unworthy’ is one of those books that gets the adrenaline flowing and gets the heart rate pumping.  There were times when I felt as though I was on a rather scary and unpredictable rollercoaster ride, with no idea as to where the story would take me next or when the killer/ killers would strike again.  There were definitely lots of twists and turns.  The story is told from the point of the view of the current investigation but we also have chapters that are flashbacks and we find out more about the history of the killer/ killers.  This way of telling the tale works really well and the story flows seamlessly.

In short, I absolutely loved reading ‘Unworthy’ and I would definitely recommend it to others.  ‘Unworthy’ works well as a standalone but because I am a bit OCD, I fully intend to read the series from the beginning and in order.  The score on the Ginger Book Geek board is a well deserved 5* out of 5*.

2 thoughts on “‘Unworthy’ by Stewart Giles”