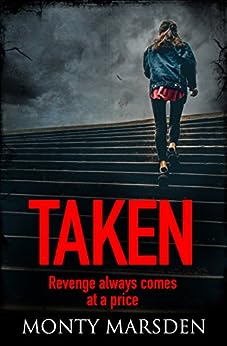 Dr Claps, devastated and guilt-ridden by Greta’s death has been on a man-hunt for Riondino ever since.

Meanwhile, an American girl disappears on the 382nd step of the Cerro trail in Guayaquil, Ecuador.

No one saw her disappear. Who took her? And how?

When the US authorities contact Claps, he is certain that it must be Riordino. But, unlike Riondino‘s other victims, the girl has disappeared into thin air…

Will Claps solve the puzzle, or will he lose his mind in the process, blinded by his own obsession?

‘Taken’ was my introduction to the character of Dr. Claps, a renowned criminal psychologist.  I hadn’t read any of the previous books in the series but the synopsis sounded just my cup of tea, as I love anything to do with criminal psychology.  I really did enjoy ‘Taken’ but more about that in a bit.

I did take a shine to the character of Dr. Claps, although his name did make me giggle at times.  He is living my dream career of being a highly successful criminal psychologist, who is called in to consult on cases.  I would absolutely love to have such a brilliant mind as his and be able to help track down killers and then assess them.  There is one case that particularly both haunts and frustrates Dr. Claps and that is the case involving Giacomo Riondino.  Two years previously Riondino killed Greta Alfieri and fled the scene.  Ever since Dr. Claps has been determined to track down this Riondino but as yet he hasn’t had any success.  His determination to catch Riondino is bordering on an unhealthy obsession.  The US authorities contact Claps to consult on a case of a missing girl, Claps is convinced that it has something to do with Riondino and he gets on the first plane over there.  This latest case shares some characteristics with Riondino’s victims but there is a big difference in that this latest girl appears to have vanished into thin air whereas Riondino’s victims haven’t.  Is this latest girl one of Riondino’s victims?  Has Dr. Claps’ obsession with Riondino blinded him to the possibility of somebody else being the perpetrator?  Will Dr. Claps’ obsession make him lose his mind?  Who is the perpetrator?  Will Dr. Claps manage to help find the perpetrator before any more women disappear or are killed?  Well for the answers to those questions and more you are just going to have to read the book for yourselves to find out as I am not going to tell you.

This book had me gripped from the moment I opened the book until the moment I closed it after I had finished the story.  As I previously stated, I am obsessed with criminal psychology and anything to do with it.  I think it’s the possibility of getting inside the minds of criminals and finding out why they did what they did.  The writing quality is such that I couldn’t fail but become involved in the story and I really did feel as though I was an assistant to Dr. Claps.  I binge read this book over the space of a few days and this binge read worked so well because it really did give me a sense of the urgency of the hunt for Riondino.  I became addicted to reading this book and because I wanted to find out what happened to the missing girl and whether or not Dr. Claps managed to find his nemesis, I just kept turning those pages.  Before I knew it I had cleared over 35% of the book but because I was so into the story I hadn’t notice how quickly the page numbers were flying past.  There were lots of twists and turns to the story and moments where I felt my heart rate increase and I had to hold my breath in anticipation of what was going to happen next.

In short, I really did enjoy reading ‘Taken’ and I would definitely recommend it to others, but particularly to those readers, who enjoy psychological thrillers.  I look forward to reading what comes next from Monty Marsden but in the meantime I will just content myself with reading his other books in the Dr. Claps series.  The score on the Ginger Book Geek board is a well deserved 4* out of 5*.