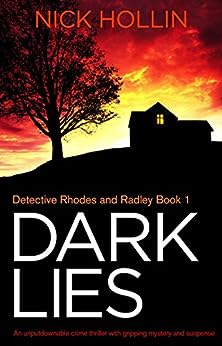 Synopsis
When a young mother is found dead in her home with a mysterious symbol drawn on her body, DI Katie Rhodes is shaken to her core; it’s a perfect match to the birthmark she once saw on her old partner, Nathan Radley.

Formerly one of the best criminal psychologists on the police force, Nathan was renowned for getting deep into the minds of the murderers he hunted. But for the past year he has lived in isolation, terrified of losing control over his own dark desires…

Katie swore she’d never knock on Nathan’s door again, but when another woman’s body is found, she knows she doesn’t have a choice.

As the body count rises and the calling cards get increasingly personal, Katie and Nathan realise that someone very close to them is playing a dangerous game. Who can they trust, and how many more innocent lives will be taken before they can crack this disturbing riddle?

I actually finished this book a couple of days ago but it’s taken me until now to write my review.  That’s not meant in a negative way- far from it but ‘Dark Lies’ is a thriller with a difference.  ‘Dark Lies’ is the debut novel from Nick Hollin.  I absolutely loved it but more about that in a bit.

DI Katie Rhodes and Nathan Radley are a detective pairing with a difference.  Katie is an ambitious, feisty, determined and sensitive young detective.  She is also haunted by something that happened in her past.  It’s during the investigation of the first murder that alarm bells start well and truly clanging for Katie.  On the victim she sees a birthmark that she last saw on the body of her former colleague Nathan Radley.  She thinks that the time is right to spring him from his self imposed exile.  Radley has a brilliant mind, a cracking job as a criminal psychologist and the unique talent of being able to get right inside the heads of the criminals.  Now this has its advantages but it also has its disadvantages as this ability of his can make his dark thoughts seem even worse.  He has put himself into exile for a year because the last case he worked on, got to him so much that he was frightened of what he would be and could be capable of.  Radley doesn’t take too kindly to being sprung out of his exile but it isn’t long until he becomes intrigued by the case and he wants to work with Rhodes again.  This case is about to get personal.  Who is the murderer?  What is their motivation?  Will DI Rhodes and Nathan Radley survive in one piece?  Well for the answers to these questions and more you are just going to have to read the book for yourselves to find out because I am not going to tell you.

To say that reading ‘Dark Lies’ was addictive reading has to be the understatement of the year.  As soon as I opened the book, I was hooked.  The story hit the ground running and maintained the pace throughout.  Nathan Radley was that much of an odd bod that I had to read on and on to see if his eccentricity/ oddness was explained later on.  I was also intrigued by the relationship between Radley and Rhodes and I wanted to see how the relationship developed.  It wasn’t long before I really got into the story.  I binge read the book over the space of a few days and that worked in this case as it gave me an idea of the intensity and urgency of the police investigation.  I loved the interaction between Radley and Rhodes and I did think that there was one heck of a chemistry there.  I must say that I really enjoyed all of the psychology talk because psychology is one of my interests and especially criminal psychology.  Reading ‘Dark Lies’ was one heck of a thriller of a rollercoaster ride with lots of twists and turns.  There were several times when I thought that I had figured out who had done what to whom, only to be sent down another path entirely.  ‘Dark Lies’ certainly kept me guessing.

In short I absolutely LOVED reading ‘Dark Lies’ and I would certainly recommend it to others and particularly to those who enjoy psychological thrillers.  I can’t wait for the next book in the series featuring DI Katie Rhodes and Nathan Radley.  Here’s hoping that there isn’t too long a wait in store.  The score on the Ginger Book Geek board is a well deserved 5* out of 5*.