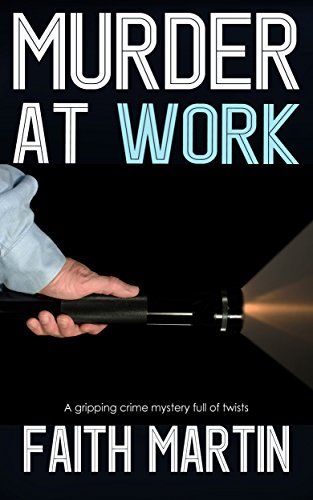 Hillary will retire in a few weeks. But can her boss get Hillary to change her mind by putting her on a murder investigation?

The victim is found dead with his head bashed in with a piece of wood. Michael Ivers was a gambler and a notorious womaniser. He had few friends and there is a long list of people who might have wanted him dead.

Hillary wants to solve her final case as a police officer and she has just days left to find out who killed him. To add to her problems, her old enemy, ex-Sergeant Frank Ross is back on the scene and is a prime suspect.

I have been a fan of Faith Martin for a while- in fact since the moment I ‘gatecrashed’ the blog tour for ‘Murder At The University’.  I eagerly devour (not literally as paper doesn’t taste very nice) each and every book that is released in the series featuring Detective Inspector Hilary Greene and her team.  The latest book in the series ‘Murder At Work’ has just been released and I absolutely loved it but more about that in a bit.

I love the character of Detective Inspector Hilary Greene.  She is a woman of a certain age with a lot of life and professional experience.  She has been a police officer for quite a long time and she has seen it all.  She was married to a less than savoury character called Ronnie Greene, who was a corrupt police officer.  There were whispers that Hilary must have known of his activities but I believe her when she says that she didn’t know.  Hilary is winding down for retirement and I don’t think that she is altogether looking forward to it.  She is so work focused and her work is her life.  I get the impression that her work is what keeps her going and  she will not be able to cope with all this free time.  Hilary is in charge of a small team, who work well together as a team but equally they can work just as well on their own.  They also look out for each other.  Hilary is a good judge of character and her gut instinct is right 99.9% of the time.  However, somebody has the knives out for Hilary and will do anything to get dirt on her before she retires and so that she loses her pension as well as other things.  It takes one twisted, passive aggressive person to take such enjoyment out of the downfall of somebody else.  Hilary needs to keep her wits about her and remain one step ahead of her enemy, whilst also trying hard to solve her current case before her retirement date.  One person, who Hilary no longer has to work with on a daily basis is Frank Ross, who is no longer a police officer but he is the night security guard for a business park which is involved in Hilary’s latest case and he is just as lazy at being a night security guard as he was as a police officer.  What can you politely say about Frank Ross?  Well a sexist, racist and homophobic blob are the kindest things you can say about him.  Hilary still has to liaise with Ross but she is under no illusions about what he is capable of.  Will Hilary and her team solve the case?  Will Hilary reach retirement age with her pension and reputation in tact?  Will Hilary’s enemy win in his campaign against her?  What is Frank Ross up to?  Well for the answers to those questions and more you are just going to have to read the book for yourselves to find out as I am not going to tell you.

To say that ‘Murder At Work’ is a page turner is an understatement.  Once I picked the book up, I couldn’t put it down and the pages seemed to be flying past in a blur.  As the investigation progressed and the tension intensified I raced through to the end of the book as I really needed to know how the case concluded and if Hilary was going to be allowed to sail off into the sunset.  The author’s writing style is such that I can’t help but be drawn into the story every time I read one of her books and as usual I really do feel as though I am part of Hilary’s team.  ‘Murder At Work’ took me through a whole range of emotions.  I shared the team’s sense of frustration when the case appeared to stall and the excitement when they had a new lead, I really did want to bop Frank Ross on the nose end for just being Frank Ross and treating Hilary like poop and I wanted to poke the eyes out of the person who seems to have it in for Hilary.  As I have read most of the series and love the character of DI Hilary Greene, I have grown to know her and feel as if she is a friend of mine, so when somebody upsets her, they in turn upset me and I feel protective of her.  I know, I know ‘Murder At Work’ is a work of fiction and the characters are not real but the story and the author’s writing style at so good that the characters really do seem to come alive.  Reading ‘Murder At Work’ was also very much like riding on a rollercoaster ride with several twists and turns.

In short, I absolutely LOVED reading ‘Murder At Work’ and I just love anything that Faith Martin writes.  I would definitely recommend her and her books to anybody.  I can’t wait to read what comes next from this fantastic author.  Here’s hoping that we don’t have too long a wait in store.  The score on the Ginger Book Geek board is a well deserved 5* out of 5*.

One thought on “‘Murder At Work’ by Faith Martin”