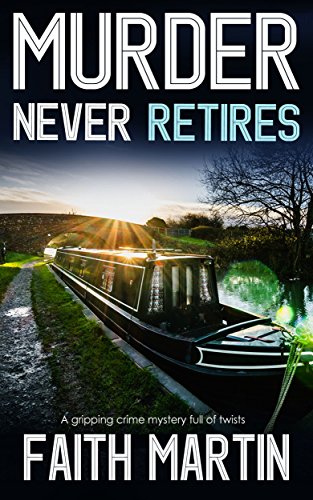 Hillary Greene returns to Thames Valley Police HQ, acting as a consultant for the Crime Review Team, looking into murders which the police have never been able to solve.

She wasn’t sure she wanted to go back. But solving crimes is irresistible for Hillary Greene. And it doesn’t hurt that her new boss is devastatingly handsome.

Twenty years ago, mother-of-three Anna McRae was found beaten to death in her kitchen with a rolling pin. She’d been having an affair with her brother-in-law, so the prime suspect was Anna’s sister Debbie. But the evidence never added up.

However as Hillary digs deeper, more secrets and betrayals emerge. Who wanted Anna dead and can Hillary finally bring her justice?

Meanwhile, Hillary is distracted by an unknown admirer, who quickly seems to be going from suitor to stalker.

Can Hillary solve a fiendishly complex case from the past while fending off unwanted attention?

I have been a fan of Faith Martin’s Hilary Greene series for quite a while now.  I came to the party slightly later than a lot of others but I have certainly caught up with the other books in the series.  I eagerly devour each and every book that is realised and I have loved each one that I have read.  ‘Murder Never Retires’ is no exception.  I absolutely totally and utterly blinking well loved it but more about that in a bit.

Where do I start with Hilary Greene?  This book sees our heroine Hilary Green return from some time away sailing on her barge, which she decided to do after she retired from the police.  She was that fed up and stressed out that she decided she just needed to get away.  The break has done her good- she looks healthier, she has lost weight, her hair has natural highlights and she just seems very relaxed.  However I think that the novelty has worn off for her now and she is itching to have purpose again.  She goes to visit her former boss to discuss a ‘possible’ return but her former boss knows that it’s almost 100% certain that she will return because she can’t switch off her keen copper’s instinct.  Hilary does return but as a civilian employee/ consultant to a cold case review squad.  She finds this rather hard to begin with as she has to get used to not having rank and status over her colleagues with all the limited perks that her former role brought her.  Hilary has not lost her ability to be able to coax information from even the most reluctant of witnesses or persons of interest.  Hilary has a very accurate gut instinct and if something doesn’t seem right to her then it usually isn’t.  This book sees Hilary attract the attention of one seriously disturbed police employee.  I won’t say which one because that would give a spoiler but safe to say his behaviour rang huge alarm bells for me from the moment I started reading about him.  Will Hilary solve the cold case?  Will Hilary get on with her colleagues?  How will Hilary deal with the unwanted attention of her admirer?  Will Hilary stay in her new role?  Well for the answers to those questions and more you are just going to have to read the book for yourselves to find out as I am not going to tell you.

The author’s writing style is such that you can’t fail to be drawn into the story and before you know it, you are addicted to reading this book.  I picked this book up intending to only read a couple of chapters but I should have known that it would be impossible to just stop at two chapters.  Nine chapters later and I was still reading.  The chapters are long but because I was enjoying the story and I was so into the investigation, I didn’t realise quite how quickly the pages were turning and before I knew what was happening I had cleared over half of the book.  The characters were so realistic that I took to most of them and reading this book felt like reuniting with old friends and colleagues.  There was more than one occasion that I wish I could have jumped into the pages of the book to defend Hilary and to deal with her rather creepy admirer but then I had to remind myself that it was fiction.  I just have a very vivid and overactive imagination.  Everything that the different characters went through, I went through with them.  ‘Murder Never Retires’ is one heck of a fast paced rollercoaster ride of a read with lots of twists and turns and moments that hit you like a punch to the gut.

In short, I absolutely loved reading ‘Murder Never Retires’ and I wholeheartedly recommend this series to other readers.  It was fabulous to see Hilary having a new lease of life with her retirement and subsequent re-employment with the police.  It was also nice to see this series going in another direction and I absolutely loved the idea of the cold case squad.  I can’t wait to read the next book in the Hilary Greene series.  Here’s hoping that we don’t have too long to wait.  The score on the Ginger Book Geek board is a well deserved 5* out of 5*.

One thought on “‘Murder Never Retires’ by Faith Martin”