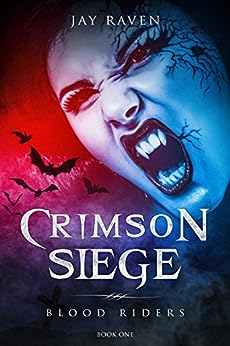 When bounty hunters target one of 19th century Europe’s most feared vampire clans, the last place any lawman wants to be is caught in the middle…

But for Anton Yoska, Lord Marshal of the Imperial lands south of the Carpathian Mountains, fate has trapped him in a supernatural stand-off that can end only in a bloodbath.

A gang of mercenaries led by Anton’s former army comrade Milosh Drubrick have captured vampire aristocrat Stefan Modjeski, wanted for a string of frenzied murders, and have come to Anton to claim the reward. And as Stefan’s predatory undead kin lay siege to the jailhouse, Anton is faced with an agonising choice – hand over his prisoner and abandon the bounty hunters to their unspeakable fate, or stand and fight.

The jailhouse defenders are outnumbered and out of options. It’s a battle that can’t be won, certain slaughter for them all, and Anton can’t trust his scheming allies. But Lord Marshal Yoska isn’t about to surrender.

For he’s an experienced vampire hunter, a dangerous man when cornered, and a single minded warrior who knows there are worse things to fear than death…

Well ‘Crimson Siege’ was certainly a departure from my usual genres of crime and chick lit but do you know what?  I really enjoyed the change.  I don’t usually read horror books as I find them too scary.  I’m a wimp I know.  However they do say a change is as good as a rest and so I eagerly picked the book up and began to read.  I absolutely loved ‘Crimson Siege’ but more about that in a bit.

Blimey oh riley there were so many different characters in this book that it would be unfair to single one out.  I loved the way in which the characters were written and described.  Although some of them were obviously vampires, they just seemed to blend in scarily easily.  I found myself taking to some of the characters, whilst at the same time I found myself hating certain other characters.  I know by nature that vampires can be brutal but some of them were more brutal than brutal if that makes sense and some of the things they did made me wince and say ouch.

‘Crimson Siege’ is really well written.  This is a book which can quite easily fit into more than one category.  It’s certainly a horror novel but at the same time it is historical and written in the gothic style.  I was certainly hooked  on this book from the moment I picked it up until the moment I put it down.  The author’s writing style is such that you can’t fail to be drawn in and before you know it you are addicted.  That was certainly the case for me.  I just had to keep reading to find out who won – either the vampires or the vampire hunters.  Part of me wanted both sides to win although I know that is impossible.  There is a fair bit of violence in this book but it certainly wasn’t over the top and I didn’t find that it put me off reading any further.  I mean how can a vampire kill somebody cleanly and politely?  It just ain’t going to happen that way.  Reading ‘Crimson Siege’ was like riding on an extremely scary,  bloodcurdling and unpredictable rollercoaster ride with lots of twists, turns and things that you don’t see coming and that creep up on your gradually.  I have to be honest and say that at time I did get a bit lost with who belonged to which group and their titles but that has more to do with my shocking memory than a problem with the writing.

In conclusion, I have to say that I really enjoyed reading this book, which surprised me to a degree because I don’t usually like horror books.  In my case a change certainly was as good as a rest.  I would definitely recommend this book to others.  I can’t wait to read the next book in the series.  Here’s hoping that we don’t have too long to wait.  The score on the Ginger Book Geek board is a well deserved 4* out of 5*.

One thought on “‘Crimson Siege’ by Jay Raven”