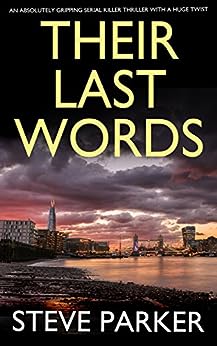 A VICTIM. A MUTILATED BODY. A SINGLE WORD.

A young woman is found dead on the streets of London. Her throat slashed, her body mutilated, and one word carved into her flesh: “DON’T.”

Detective Superintendent Ray Paterson is assigned to the case. Young, handsome, and from a wealthy background, he’s tipped for the top. He joins a team based out of Bermondsey, South London. It’s meant to be a stepping stone to his next promotion, but this case will threaten to bring down his career and everything he thought he knew about policing.

Paterson is put in charge of the dead girl’s investigation and quickly discovers he must rely on his friend and mentor, Detective Sergeant Dave Jordan to guide him through.

THEN ANOTHER BODY IS DISCOVERED. ANOTHER WORD CUT INTO THE VICTIM’S CHEST.

The police realise they may have a depraved serial killer on their hands. The murderer is trying to send them a message carved in his victims’ bodies. But who’s the message really for?

How many more must die? Detective Paterson may be the only man who can stop this vile killer . . . if he can survive long enough.

I have a confession to make (my second of the evening so far).  Prior to receiving an e-mail from Joffe Books, I hadn’t actually heard of Steve Parker- sorry Steve.  After finishing reading ‘Their Last Words’ I find myself asking myself why haven’t I discovered Steve Parker before now?  I absolutely, totally and utterly LOVED reading ‘Their Last Words’ but more about that in a bit.

The main character of this book is Detective Superintendent Ray Paterson.  He’s an ambitious man, who is on the graduate fast track scheme for police officers.  He has soared up the career ladder and despite his rank, he is still relatively young.  I got the impression that to a degree Paterson is a bit like a fish out of water.  He has risen up the ranks that quickly that he hasn’t gained the experience that comes with either age or practice in the form of leading major investigations or interviewing key suspects and so on and so forth.  Paterson relies heavily on his friend and mentor, Detective Sergeant Dave Jordan to help him gain the experience.  Paterson has led something of a privileged life and he is financially secure, having inherited a vast amount of money.  Some of those who work for him can’t understand why he wanted to become a police officer if he has enough money already to live comfortably.  I must admit that initially the same thought crossed my mind.  Paterson is a determined and compassionate police officer, who strives to bring the guilty to justice and achieve some kind of closure for the victims of crime.  Paterson is like a dog with a bone in that once he has got his teeth into a case, he doesn’t easily drop it or switch off from it.  He lives, breathes and eats the case so to speak.  I took to both characters really easily, even if sometimes DS Jordan had even less tact and diplomacy than me and that’s saying something.  The author’s writing style is so convincing and so realistic that the characters seemed real to me and I could literally imagine them standing in front of me and acting out what I was reading.

Blimey oh riley, this was one hell of an unpredictable and scary rollercoaster ride of a read.  The story hit the ground running and maintained the pace throughout.  As soon as I read the first sentence I just knew that I was going to become addicted to reading this book and so it proved.  For me ‘Their Last Words’ really is a ‘CPID’ (can’t put it down) book.  My Kindle wasn’t glued to my hand but it might as well have been because it came everywhere with me.  I just had to keep reading to see if Paterson and his team were going to be able to solve the case without any further loss of life, to see if Paterson managed to gain confidence and keep the respect of his team and to see if Detective Sergeant Johnny Clocks managed to get to the end of the book without having suffered a reprimand or the sack.  Clocks was one character who made my skin crawl, my toes curl and my fists want to punch him.  The page numbers and the time flew past in a blur and before I realised what was happening I had finished the book, which I had conflicting feelings about.  I was pleased to finish because at least I knew how the investigation ended but I wasn’t pleased to finish because I was enjoying the story, the characters and the writing style so much that I just wanted the book to continue.

Some of the details of the crime are rather graphic to say the least.  It’s just as well that I have a strong stomach because I was eating my tea, whilst reading about the graphic nature of the injuries of the first murder victim.  Thank goodness I wasn’t eating meat or sausages at the time.  Although the nature of the injuries was graphic I didn’t feel that it was in any way gratuitous or gory for the sake of being gory.  If anything, it only added to the story and the authenticity of the investigation.

In conclusion I absolutely, totally and utterly flipping well loved reading ‘Their Last Words’ and I wholeheartedly recommend it to other readers.  I can’t wait to see what comes next from Steve Parker.  Here’s hoping that I don’t have too long to wait.  The score on the Ginger Book Geek board is a well deserved 5* out of 5*.