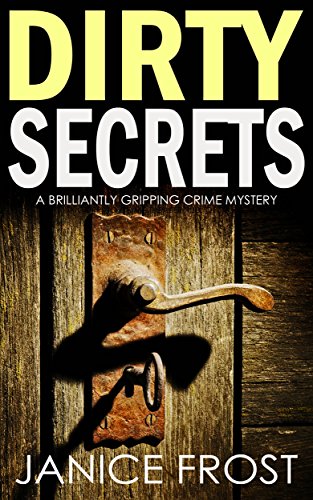 Val Marsh gets home to find her husband Russell shot through the head. Russell’s ‘angel investment’ company had made him many enemies. His business was struggling and his family and friends weren’t all on his side. But did any of them really want him dead?

I have discovered lots of good authors via Joffe Books.  Janice Frost is one such author.  I have been a fan of hers for quite a while now and I eagerly read each and every book that she releases.  When I found out that Janice was due to release ‘Dirty Secrets’, I knew it was one book that I just had to clear the decks to read.  I am so glad I did as I absolutely loved ‘Dirty Secrets’ but more about that in a bit.

I loved the characters of DI Jim Neal and DS Ava Merry.  DI Neal is a career police officer, who works seriously long hours.  DI Neal is the sort of boss you would like to work for.  He is kind, he is generous, he is supportive, he takes an equal share of the workload and he wouldn’t ask you to do anything that he wouldn’t be willing to do himself.  He works well as part of a team but he can work equally well on his own.  Neal shares a close working relationship with DS Ava Merry and they are that close that it was almost like they are brother and sister.  Merry worries about Neal and never more so than when she realises that his ex-girlfriend is back on the scene and trying to get back with Neal.  Neal’s sister is equally worried about him.  DS Merry is one feisty, stubborn and courageous young woman.  She is another one who works well either on her own or as part of a team.  She tries to be as supportive as she can be to the other officers in her team.  I especially liked the way in which she cares about DI Neal and the way in which she cares about another officer, whose boyfriend has a cancer scare.

The rest of the main characters in this book are a shifty bunch and I didn’t trust any of them.  Each and every one of them are hiding secrets and they have several dozen skeletons in the closet. Some of them couldn’t tell the truth if their lives depended on it.  The frustrating thing for the police is the fact they know that people are hiding things from them, which is a seriously bad move.  It’s left to the police to unpick the tangled web that has been weaved.

Blimey oh riley I was hooked on this book from the moment I began to read.  I just couldn’t get enough of this book and I even tried to ration how much I read all at once, because the intention was to prolong the enjoyment of the book but that intention soon went out of the window.  I binge read the book in one sitting.  I guess (no make that I know) that I am such a nebby Nora (a nosy person) that I just had to read on so I could snoop into other people’s lives, find out all their deepest and darkest secrets and watch the skeletons come tumbling out of the closet.  The page numbers just flew past in a blur and before I knew what was happening I had finished the book, which I was so disappointed about, because I was enjoying the writing style, the storylines and the diverse set of characters so much that I just wanted the book to continue.  I thought that only a couple of hours had passed so imagine my surprise when I found out that 4 and a bit hours had flown by.  I love Janice’s writing style and the way in which you know that a surprise of one, way, shape or form is waiting for you just over the page.  The author’s writing style is so realistic and vivid that reading this book was the literary equivalent of watching a police drama on the television.  All the action is playing out in front of your eyes and you find yourself interacting with the book, as if the characters can hear you.  I smugly thought that I had worked out who had done what and why, only to discover that I had completely got the wrong end of the stick and the real answers were down another path entirely.

Although this is the fifth book in the Neal & Merry series, it can be read as a standalone and you don’t need to have read the previous four for this book to make sense.  As I am a bit OCD, I fully intend to dig out the other four books from my ever increasing ‘TBR’ mountain and reading the series in order.

In short I absolutely loved reading ‘Dirty Secrets’.  ‘Dirty Secrets’ is one of those books that reels you in like a fish, captures your interest, grabs you by the throat and won’t let you go until you have finished reading the book.  I wholeheartedly recommend this author and this series to anybody.  I can’t wait to read what comes next from Janice Frost’s ever so slightly twisted mind.  Here’s hoping that I don’t have too long to wait.  The score on the Ginger Book Geek board is a well deserved 5* out of 5*.