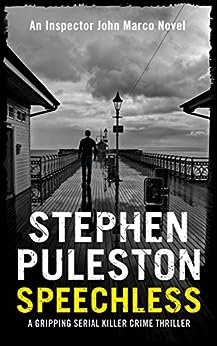 But when he discovers the dead man’s tongue has been amputated Marco realises it’s nothing but routine. More murders in the Polish community take Inspector John Marco and his team into the East European immigrant community and the murky world of people trafficking.

But what is it that links all the deaths together? When the evidence points to one of the city’s criminal and the involvement of a gangster from Poland Marco faces the challenge of gathering evidence from a close knit and secretive community.

And why do the Polish Secret Service seem to be interested? When Marco finds himself entangled emotionally its impossible for him to think clearly. In search of an answer Marco travels to Poland only to find himself implicated in a murder and hoping he can avoid another.

Racing back to Cardiff he hopes he has enough to unravel the case and arrest the perpetrators.

I have been a fan of Stephen’s books since I was invited to take part in the blog tour for one of his books last year.   I have been trying to  play catch up on his other books, starting with ‘Speechless’, which is the first full length book in the Detective John Marco series.  My oh my I absolutely loved reading ‘Speechless’ but more about that in a bit.

I absolutely loved Detective John Marco and took to him from the start.  He is one hard working detective and he puts in far more hours than he is paid for.  Once he starts a case, he is determined to see it through to the end and he doesn’t like anybody trying to muscle in on his investigation.   Marco likes to get a result in all his cases and on more than one occasion he has slightly bent the rules to get the results that he is after.   Marco has a small team but they work really well together.  Marco is the sort of boss that you would want to work for.  He is caring, dedicated, hard working, he takes an equal share of the workload and wouldn’t ask you to do anything that he wouldn’t do himself.  Marco is supportive of his team and each person has each other’s backs.  That said he has had his problems with alcoholism, family problems and the break up of his marriage but this just makes him seem more real and human.  He has also had his problems with some of his colleagues, which you learn about as the book continues.  Marco has his problems with his parents and his mother sounds rather overpowering.  At times Marco did come across as a bit spoiled and only thinks of himself.  For example. initially he is reluctant to take the murder case because he has tickets for Cardiff City’s first game in the Premiership!

As with Stephen’s other books that I have read, I was hooked on ‘Speechless’ from the moment I picked up the book and began to read.  The story hits the ground running and maintains the pace throughout.  I binge read the book over the space of a couple of days which really worked because it gave me a sense of the intensity of a police investigation.  The author’s writing is so good that I really did feel as though I was a member of the police, investigating the case.  I even found myself trying to interact with the book and throw out suggestions of my own on how to find the killer but then I had to remind myself that it was a work of fiction and the characters are not real.  I find that if I really get into a book, I tend to live and breathe the story.  That was certainly the case for me.  When I  put the book down, I was looking forward to the moment I could pick the book back up again.  I even begrudged having to take my two Labradors out for their walks and I begrudged having to put the book down so I could sleep.  I’ve decided that sleep is for wimps.  Ha ha.  Reading this book was much like riding on an unpredictable and rather scary rollercoaster ride with many twists, turns and stomach churning moments.  There are certain details of the case, which made my stomach flip and I will certainly not look at ‘tongue meat’ in the same light again.

In conclusion, Stephen Puleston certainly has a winner on his hands with ‘Speechless’.  I loved everything about this book and I can honestly say that there was nothing that I didn’t like.  I would definitely recommend this book to other readers.  I can’t wait to read what fate has in store for Detective John Marco but in the meantime I will be digging out Stephen’s other books from my ever increasing ‘TBR’ (to be read) pike and making reading them one of my top reading priorities.  The score on the Ginger Book Geek board is a very well deserved 5* out of 5*.