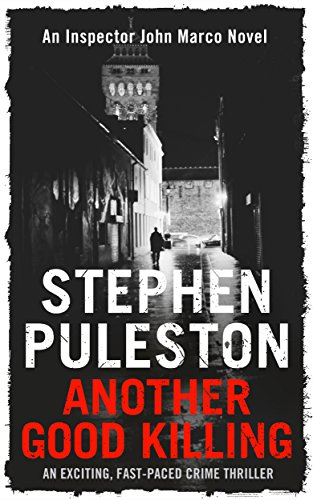 Does any man deserve to die?
When a well-connected and wealthy banker is found dead in his luxury car in the middle of Cardiff, the motive for the crime seems clear. The killer even left a note telling the world the man deserved to die, simply for his greed.
But despite the obvious clues, seasoned detective, John Marco has his doubts that this was just a disgruntled employee. The killing was too clean, the crime scene too perfect. Marco also has a gut feeling that the family of the victim are hiding something…
And when another business executive is murdered, Marco’s fears come true – there is now a serial killer to catch. An online video points to a violent anarchist group, determined to make the bankers pay for their perceived sins. But Marco doubts a ragtag bunch of anarchists would be granted breathing space in the world of the sophisticated uber rich.
As the case progresses and Marco starts piecing together the clues, things take a dramatic twist when a member of Marco’s team is kidnapped. Now the killer has made things personal and Marco faces a race against time to bring the murder to justice – before it’s too late…

I have had the distinct pleasure of reading and reviewing a few of Stephen’s books now.  I have loved each and every one.  When I was asked if I would like to read the second book in the Inspector Marco series ‘Another Good Killing’, naturally I jumped at the chance and I am so glad that I did.  I absolutely, totally and utterly loved reading ‘Another Good Killing’ but more about that in a bit.

I couldn’t help but like Detective Inspector Marco.  He is a career policeman, who has been in the force for a little while now.  He gets on with most people although there is a colleague of the same rank, who he doesn’t exactly see eye to eye with.  To tell you the truth I think that they have a love/ hate relationship- they love to hate each other.  Marco certainly has his problems but he tries not to let them interfere with his work.  Marco has what you might call ‘fractured’ personal relationships.  He is in touch with his mother but I think that he keeps her at arms length because she gets on his nerves and she tries to interfere in his life.  Marco isn’t in touch with his son at the moment and I am not entirely sure as to why.  I mean if I had a child who didn’t live with me, I would move heaven and earth to maintain a relationship, even if it just meant swapping the odd letter or e-mail or phone call.  Marco doesn’t seem that bothered about the lack of contact with his son, which I couldn’t understand.  Marco is also a recovering alcoholic.  Marco does have a great working relationship with his DS.  They ‘get’ each other, they know what makes the other tick and they have each other’s backs.  Marco, his DS and the rest of the team have to work hard to discover the who, where, what. how and why of this case.

‘Another Good Killing’ is extremely well written.  I was hooked on the book from the moment I opened the front cover so to speak.  The author certainly knows how to grab your attention from the start.  There were more twists and turns in this book than you would find on a ‘Snakes & Ladders’ cover.  The book is set in Wales.  The author uses such powerful and vivid descriptions that I could imagine that I was actually there in Wales and helping Marco with his investigation.  I felt like I was a member of Marco’s team and I began ‘interacting’ with the book, shouting out my suggestions and opinions so to speak.  I know, I know it’s a work of fiction but if I find a book and its storylines convincing then the book somehow becomes real to me.

I found ‘Another Good Killing’ to be another page turner, which I literally couldn’t put down.   My Kindle wasn’t glued to my hand but it might as well have been because it came everywhere with me.  I was so addicted to the story that I couldn’t bear to break off from reading it.  I picked up my Kindle, only intending to read the first couple of chapters but that intention soon flew out of the window because the first time I looked up to check on my progress I had read 6 chapters and I had cleared a fair chunk of the book. I was so focused on  ‘Another Good Killing’ that I was able to shut out all other distractions.   Reading ‘Another Good Killing’ is much like being on a very unpredictable and very scary rollercoaster ride with no idea of which direction you will be going in next.  ‘Another Good Killing’ is one of those books that keeps you on your toes and keeps you guessing.

To conclude I have to say that this is another brilliant book from Stephen Puleston and I wouldn’t hesitate to recommend this author and his books to other readers.  I can’t wait to read what comes next from Stephen Puleston.  The score on the Ginger Book Geek board is a well deserved 5* out of 5*.