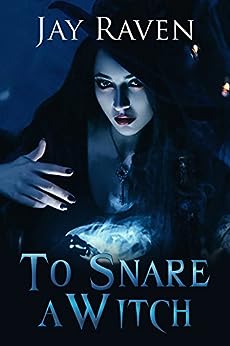 No female dares spurn the lecherous advances of Sir Henry Cruttendon, 17th Century England’s most reviled nobleman. For to do risks a retribution that would terrify the Devil himself.

But Elizabeth Fiennes is no ordinary woman, blessed with stunning beauty, intelligence and guile. Coming from an influential family, she believes Cruttendon wouldn’t dare make a move against her.

What she doesn’t understand is that the elderly Earl is determined to satisfy his lust at any cost and plans to use the wave of witch trials, fear and superstition sweeping the countryside to force her into his clutches.

And as he springs his malicious trap it triggers a chain of unholy events that will plunge hunter and prey into a maelstrom of deceit, terror and depravity – leaving them both staring into the face of true evil…

I have had the pleasure of reading and reviewing another book (‘Crimson Siege’) written by Jay, so I was excited to hear that he had released another book.  I just knew that I had to read it because I enjoyed the previous one so much.  I was not to be disappointed as I loved it but more about that in a bit.

I have to be honest and say that prior to reading Jay’s previous book I was not a fan of the horror genre.  The odd time that I picked up a horror book, I just couldn’t get into it.  Then came ‘Crimson Siege’ and now ‘To Snare A Witch’ and I have been converted into a horror fan.

‘To Snare A Witch’ is a short novella story set in the 17th Century and as the title suggests focusses on trapping witches and preying on peoples fears of the time.  Two of the baddies in this book are going from place to place catching ‘witches’ and making off with the reward money.  The baddies really did give me the heebie jeebies and there were times that I wanted to jump inside the pages of the book and throw them into the lakes, instead of the mostly innocent women who they basically murdered.  I can’t say that I much cared for Sir Henry Cruttendon either.  He is one seriously creepy character who won’t take no for an answer.  He made my skin crawl from the start and he could have done with taking a very long walk off a very short cliff.

I was hooked on this novella from the moment I picked the book up and began to read.  I wasn’t sure that I would enjoy reading a shorter story as I am used to reading longer books but I needn’t have worried.  This novella has so much action crammed into a small number of pages that at times I thought I was reading a longer book.  I soon became addicted to the writing style, the characters and the story. The page numbers flew past in a blur and before I released what was happening I had finished the book which I was so disappointed about.  In fact my only complaint about the book is that it had to end.

It would be fair to say that I loved reading this novella and I would definitely recommend it to other readers.  Jay Raven is an author to watch and I look forward to reading other books written by him.  The score on the Ginger Book Geek board is a well deserved 5* out of 5*.

One thought on “‘To Snare A Witch’ by Jay Raven”