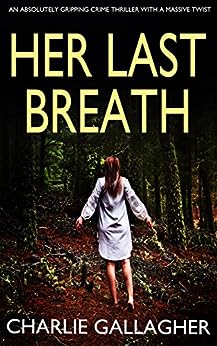 DETECTIVE GEORGE ELMS THOUGHT HE’D SEEN IT ALL, UNTIL HE COMES UP AGAINST SERIAL KILLER HENRY ‘THE BULL’ ROBERTS.

Henry Roberts had a type — young, blonde, attractive women. He is three years into a life sentence.

Two of his victims were never found.

Now, Henry Roberts is dying and he wants to make a deal. Move him to a secure unit by the sea and he will tell the police where the other victims’ remains are.

The offer is accepted and Detective George Elms travels to the force who led the original investigation. He is the messenger. He finds a police force and a community still shattered. As he reviews the old case notes he also learns something else. Henry Roberts didn’t work alone.

A woman goes missing who fits the profile of the other victims. The circumstances of her disappearance do too — she never made it from her commuter train to her car.

Then a second woman disappears. George is convinced the cases are linked. Henry Roberts told him on his prison visit that two is better because, “you can make the other one watch.”

Time is running out for George. He’s convinced that Henry Roberts knows who he should be chasing, but will he help before he takes his last breath? Or the women take theirs?

I have read a fair few of Charlie’s books now and I have loved each one that I have read.  ‘Her Last Breath’ is no exception.  I absolutely totally and utterly loved it but more about that in a bit.

Inspector George Elms is a dedicated police officer.  The opening of this book sees him having to visit a notorious killer in prison, who is allegedly dying.  This killer has money and he is wanting to see his last days out in a maximum security, purpose built unit paid for with his own money.  Roberts says that he will fund this unit and tell the police where two of the bodies are in return for his release on compassionate grounds.  Elms is not at all happy about this prospect and makes his feelings known.  Unsurprisingly the bosses take no notice.  I could totally see where Elms was coming from and I agreed with him.  Elms is sent to the police force, who investigated the killer, to pass on the message about what is happening with Roberts.  Elms decides to review the evidence whilst he is there and he is horrified to realise that Roberts had an accomplice.  Whilst he is there two women go missing and there are distinct similarities between the old cases and the new cases.  Elms faces a race against time to get Roberts to cough up what he knows, find the accomplice, solve the case before any further loss of life and he has to remain alive himself.  Phew Elms certainly has a lot on his place.  Will he succeed?  Well for the answer to that question you are just going to have to read the book for yourselves to find out because I am not going to tell you.

‘Her Last Breath’ is extremely well written.  The author grabbed my attention from the moment I read the synopsis, never mind started reading the book properly.  I just knew that this was one book I had to read sooner rather than later.  I soon became addicted to reading ‘Her Last Breath’ and I just couldn’t put the book down.  My Kindle wasn’t glued to my hand but it might as well have been because it came everywhere with me.  I was desperate to find out if Elms survived, if he managed to solve the case and if Roberts ever did make it out of prison.  The more I read, the quicker the pages turned.  In fact they were turning that quickly that they were almost turning themselves and before I knew what was happening I had finished reading ‘Her Last Breath’ which I had mixed feelings about.  Don’t get me wrong I was pleased to finish because at least I knew how the story ended but I was enjoying the writing style, the story, the places and the characters so much that I didn’t want the book to end.    The story in ‘Her Last Breath’ hits the ground running and maintains the pace throughout.  The writing is so good that I almost felt as if I was a member of the investigating team and I found myself interacting with the book.  I know it’s a work of fiction but if I enjoy a book as much as I did this one, then I tend to shout out loud or argue with the characters and so on and so forth.  Reading ‘Her Last Breath’ is much like riding on a scary rollercoaster ride with twists and turns aplenty.  There were times when I almost had to read through my fingers because I genuinely feared what was going to happen next.

It’s fair to say that I simply LOVED reading ‘Her Last Breath’.  It’s easily as good as Charlie’s other books and it’s a must read for crime fans.  I can’t wait to read what he comes up with next.  The score on the Ginger Book Geek board just has to be 5* out of 5*.