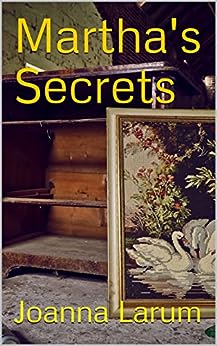 Daniel Coleman is worrying about keeping his two new businesses going while, at the same time, trying to find a way out of being conscripted into the Army and being sent to Flanders to fight. He has enough on his plate without finding out that his younger sister, Martha, isn’t the pleasant and polite young woman she pretends to be but a vindictive and vicious termagant who will stop at nothing to gain revenge for any perceived wrong. What can Daniel do when he discovers that Martha is not only a spiteful blackmailer but also a ruthless killer? How can he stop her from killing again, especially as he may be her next victim?

My goodness why have I not discovered Joanna Larum before?  Dear oh dear I now realise just what I have been missing out on.  I absolutely adored reading ‘Martha’s Secrets’ but more about that in a bit.

I loved and took to the character of Daniel Coleman from the start.  He is a lad of a particular age, who finds himself in a bit of a pickle.  The Great War has started and men are joining up.  Daniel doesn’t want to join up- not because he is a coward but because he genuinely doesn’t believe in war.  Daniel has a shop, which he runs with the help of his sister, Martha.  One day a sergeant with the army goes into the shop and asks Daniel if he would be able to help the army with ferrying building supplies between Darlington and Catterick to build the barracks that are needed to house the increasing numbers of soldiers.  It has come to the attention of the army that Daniel has a modern van which will cut down on delivery time.  Whilst he is unloading the first load at building stuff he comes across a boy from the local workhouse called Georgie, whose story is enough to melt the frostiest of hearts and it did (melt my heart that is).  Daniel takes the lad on as his apprentice and they set about their work with gusto.  Daniel’s sister Martha becomes more of a problem.  Martha’s background is complicated to say the least and she is the product of incest (non consensual on the part of Martha’s mother).  I did wonder if the fact that she was born out of incest has sent the wiring in her brain a bit wappy.  She is one seriously nasty piece of work.  She blackmails people and she has been implicated in the suicide of another woman, who was driven to take her own life as a result of Martha’s actions.  Martha doesn’t let that bother her and she tramples all over other people’s feelings.  As long as she is ok then everybody else can do one.  Daniel does know that there is something different about his sister but he is horrified to realise just what she is capable of.  Can he stop her before she kills again or is he going to be her next victim?

‘Martha’s Secrets’ appealed to me on so many levels.  As well as being a book geek, I am a huge history nerd with a particular interest in the Great War (First World War).  I think that I must have been born in the wrong era.  I didn’t know my grandparents and my great grandparents so learning about the conditions that they lived in, helps me to feel closer to them somehow.  I also love books that are set in my local area and you can’t get more local to me than South Bank, Middlesbrough and Darlington, which are all mentioned in the book.  It made such a refreshing change to read about places and know where they were!

Can I just say that this book is absolutely, brilliantly written and one of my most favourite reads so far this year!!  Oh my days Joanna Larum knows how to get your attention and tug on your heartstrings from the word go.  When I got to the part where Georgie, Daniel’s apprentice, tells Daniel about living in the workhouse, well that was it.  I was in a bit of a mess.  I’m a soppy devil I know.  I have relatives who had to stay in the workhouse and what they went through breaks my heart.  Joanna Larum uses such powerful and vivid descriptions that it was easy to picture events from the book as they happened.  When Daniel goes to Darlington station to get the first load of building materials, if I closed my eyes I could literally imagine being stood at the station with the noise of the hustle and bustle of a busy station and the smell of the steam trains.  In fact if I had had a time machine I would have gone back to that very scene.  I became seriously addicted to reading this book from the moment I picked it up and began to read.  I picked the book up only intending to read a couple of chapters but that intention soon flew out of the window because twelve chapters later and I was still sat in the same spot on the couch.  I was enjoying the book so much that I just couldn’t stop reading.  The more I got into the story & the characters, the more I wanted to read.  I just had to keep turning those pages because I was so desperate to find out who this instalment ended.  At one point the pages were turning that quickly that the page numbers became a blur and it was almost as if the pages were turning themselves.  Before I realised what was happening I had finished the book which I was so disappointed about.  I was so into the story and I was loving the author’s writing style so much that I just wanted the book to continue.  To say that this book affected me emotionally has to be the understatement of the week.

‘Martha’s Secrets’ is the second book in a series.  It works perfectly well as a standalone but because I am a bit OCD, I want to read the first book in the series called ‘Something Wicked This Way’ and then re-read ‘Martha’s Secrets’.

I have to say that ‘Martha’s Secrets’ is one brilliant read and it has to be in my top 5 reads of the year.  Joanna Larum is one of those authors where you just have to drop everything so you can read their next book.  I can honestly say that there was nothing about the book that I did not enjoy.  I strongly recommend that you read ‘Martha’s Secrets’ and Joanna’s other books.  The score on the Ginger Book Geek board is a well deserved 5* out of 5*.

One thought on “‘Martha’s Secrets’ by Joanna Larum”