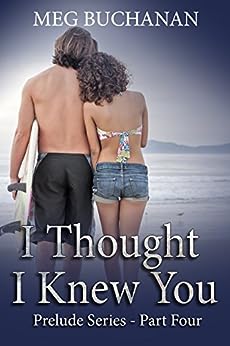 Luke Reilly’s whole life is mapped out. His father wants him to work in the family business. Tessa wants him to marry her. But he has already broken out of the straight jacket they’ve put him in. And he’s about to get found out.

Can he mend what he’s broken?

Does he want to?

Will he leave and chase the dream, or stay and do what everyone expects?

I have a confession to make.  Yes I know this is becoming something of a regular habit.  I haven’t actually read any of Megan’s books before and I haven’t read an of the ‘Prelude Series’.  Whoops a daisy.  Not to worry though because having read ‘I Thought I Knew You’, I fully intend to read the rest of the series.  I really enjoyed it but more about that in a bit.

Luke Reilly is one of those characters that I took to but in the end I wanted to slap him silly.  He has a future working for his father mapped out for him but it’s not a future that he is too keen on.  In fact I got the impression that it’s a future he is dreading.  At the same time he is also going steady with a lovely lass called Tessa.  They go well together and Tessa is hoping that they marry.  I got the feeling that he is feeling trapped both work wise and love life wise.  Luke plays in a band and the band gets the chance to go and seek fame and fortune.  This offers Luke an escape route and he gladly takes it.  Something emerges about Luke and the secrets he has been keeping.  It turns out that he has two women on the go but neither knows about the other one.  Talk about having your cake and eating it.  Luke strikes me as being very selfish, self centred and arrogant with it.  I think that he also has delusions of grandeur but that’s just my opinion.  I think it’s fair to say that me and Luke would never get on.

I found it really easy to read ‘I Thought I Knew You’.  The author’s writing style is such that you can’t fail to be drawn into the story and by the end of the first page I was hooked.  I had to keep reading to find out if Luke found fame and fortune or if he really got what he deserved.  The more I read, the more I got into the story and the quicker the pages turned.  The book is very well written and it’s easy to see why this series is as popular as it is.  I found myself interacting with the book.  I know, I know it’s fiction but when I get into a book and I am enjoying the story, I start talking, arguing and/ or shouting at the book.  It’s not as if the characters can hear me but it makes me feel better.  The characters are so well written that they seem to come alive.

In short, I would definitely say that I really enjoyed ‘I Thought I Knew You’ and I would definitely recommend it to other readers.  As I am a bit OCD, I fully intend to get the other books in the series and read the series in order.  The score on the Ginger Book Geek board is a well deserved 4* out of 5*.