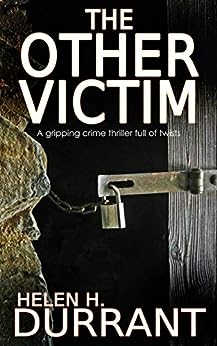 Ronald Potter is found dead on the kitchen floor of a house he was about to show a client around. Ronald led a blameless life and Detective Matt Brindle and the team cannot find any motive for his murder.

But an intensive search of the property leads to a very disturbing discovery in the cellar.

Meanwhile, a young mother is being held captive by someone who will stop at nothing to get the information they want.

DI Matt Brindle discovers connections to organised crime and a sleazy night club. Can he expose the villains before any more people die?

I have been busy catching up on reading all of Helen’s books (all of which I have loved by the way) but I must admit that I haven’t come across DI Matt Brindle before.  Sorry Helen but fret no more because I have certainly come across him now.

DI Matt Brindle is different to a lot of policemen I have come across in crime fiction.  Matt is rather posh to say the least and he doesn’t really need to be a policeman.  By that I mean that he has a title and an estate.  His mother certainly doesn’t want him to work for the police.  That is perhaps understandable because Matt was left with physical and mental scars following events in a previous case.  Matt feels enormously guilty too because he survived but his close work colleague didn’t.  Against his mother’s wishes he goes back to work and he is soon thrust into the thick of things and he has to investigate the murder of Ronald Potter.  Matt is a determined policeman, who investigates cases thoroughly and methodically.  If something doesn’t seem right to him then it usually isn’t.  Matt is like a dog with a bone in that respect.  Matt works well as part of a team but he works equally well on his own.  He sounds like an ideal type of boss in that he won’t ask anybody to do anything that he wouldn’t be willing to do himself.  Will Matt solve the case?  Will DI Matt Brindle stay in the police force or will he do as his mother wishes?  Well for the answers to those questions and more you are just going to have to read the book for yourselves to find out as I am not going to tell you.

Wowzers Helen H. Durrant has come up with the goods again and this is one hell of a read.  The story hits the ground running and maintains the pace throughout.  From the moment I picked the book up, I was hooked on the story.  I binge read the book over the space of a few hours despite my intention not to read too much in one sitting.  Whoops.  For me, ‘The Other Victim’ really is a ‘CPID’ (can’t put it down) book.  It wasn’t exactly glued to my hand but it might as well have been because it came everywhere with me.  I couldn’t bear to be parted from the book and if I had to be parted from it, then I was counting down the time until I could pick it up again.  I usually have the attention span of a gnat but not in this case because I had to really concentrate on the book as there was so much going on.  The pages turned over at speed and at one point the pages were turning that quickly that it was almost as if they were turning themselves.  Before I knew what was happening I had finished reading the book, which I was so disappointed about.  I was enjoying everything about the book and I just wanted it to continue.  Reading this book was much like being on one hell of an unpredictable and at times rather scary rollercoaster ride.  There were times where I almost had to read through my fingers as I genuinely feared what was going to happen next.  Silly me because I knew that I had to read on if I wanted to find out what happened in the story.

In my opinion ‘The Other Victim’ is superbly written and the book has a bit of everything.  There’s drama, murder, danger and intrigue in spades.  I would have no hesitation in recommending this author and her books to other readers.  I can’t wait to read what she comes up with next.  The score on the Ginger Book Geek board just has to be 5* out of 5*.