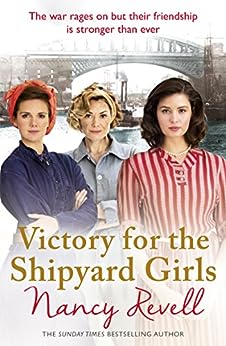 With the war showing no sign of abating, Helen is thriving in her role as shipyard manager. But at home the return of her father brings a shocking discovery that tears her family apart.

Gloria is shouldering the burden of a terrible secret. If the truth comes out there could be dire consequences, and it will take all her resolve to resist the pressure around her.

Meanwhile Rosie is throwing herself into her work, taking on as many shifts as she can. Anything to keep her mind off the fact that she hasn’t heard from her sweetheart in months…

With life in the shipyards tougher than ever, will the strength of their friendship see them through to victory?

The characters in ‘The Shipyard Girls’ are certainly a mixed bunch.  Some of the characters I absolutely loved and some of the characters I could honestly hit a few dozen times with a wet flip flop.   I’ll try not to give too much away.  I absolutely love the characters of Gloria, Rosie, Polly and the rest of the shipyard girl gang.  I also love the characters of Agnes and Bel.  Gloria is a woman, who is a single mother.  She was the childhood sweetheart of Jack Crawford, whose daughter Helen is the current manager of the shipyard.  Jack was taken away from Gloria by the delightful (note the sarcasm) Miriam but more about the old witch a bit later.  Gloria married Vinnie and they had two sons, who have grown up.  Vinnie used Gloria as a punch bag and he abused her mentally, physically and financially.  Thankfully by the time this book starts, Vinnie is out of the picture.  I am keeping my fingers crossed that he will soon be taking a very long walk off Roker Pier!!  Gloria and Jack have renewed their relationship and baby Hope is the result.  Hope is a much loved and much cared for baby.  However, thanks to Miriam’s meddling, Jack has been sent up to Glasgow and Gloria is on her own again.  I am keeping my fingers, toes and my dogs are keeping their paws crossed that Jack comes back to set up home with Gloria and the sooner the better.  Rosie is another main focus of the storylines in this book.  Rosie is the supervisor of the Shipyard Girls but that isn’t her only job.  Rosie has a part share in a bordello and for many years she worked there to provide for her and her sister.  Rosie was determined that her sister should have an education and she should remain out of the clutches of their Uncle who had wandering hands.  Rosie has been in a relationship with Peter, who happens to be a policeman.  His job doesn’t sit well with her involvement at the bordello.  Their relationship hasn’t gone down well in certain quarters and for a time Rosie ended things with Peter.  However, the start of this book sees a happy event occurring but their happiness is soon interrupted by a change of duties for Peter.  I don’t want to type too much more about exactly what happens to either lady as I don’t want to spoil the book for other readers.  Now as for the characters I cannot stand and would happily slap a few dozen times with a wet fish.  The main object of my fury is the delightful Miriam.  She is a spiteful, vindictive, two faced, manipulative witch.  And that’s me being polite.  She doesn’t want Jack but equally she doesn’t want Gloria to have him.  Deep down Miriam has always known that Jack has never loved her.  The only way she could get Jack to marry her was to trick him, which is diabolical.  She even stoops so low as to manipulate her own daughter Helen, which is bang out of order and for no other reason than to get one up on somebody.  Helen does start to open her eyes to what sort of a woman Miriam is.  Miriam is one of those people, who thinks of herself first, second and third.  I am so hoping that somewhere along the line, Miriam is going to get what is coming to her.  Karma is on its way to Miriam Crawford and hopefully I will be able to watch her downfall.  In the previous books of the series, Helen was another character who I disliked.  However my opinion of Helen did start to change as ‘Victory For The Shipyard Girls’ went on.  In fact I felt very sorry for her by the end of the book.

Blimey oh riley ‘Victory For The Shipyard Girls’ is brilliantly written.  The author’s writing style is such that you can’t fail to be drawn into the story and before too long you find that you can’t stop reading because you care so much about what happens to the characters.  At least that is what happened to me at any rate.  The more I read, the more I got into the story and the longer I had to keep on reading.  For me ‘Victory For The Shipyard Girls’ really is a ‘CPID’ (can’t put it down) book.  My intention was to ration how much I read in one session but I was enjoying the book so much that my intention went out of the window and I kept on reading.  Before I knew what was happening I had finished the book which I had mixed feelings about.  Don’t get me wrong I was pleased to finish the book because at least I knew how this instalment ended but I was disappointed to finish because I was enjoying the book so much that I just wanted the book to continue.  I found that the characters were so realistically written that they seemed to come alive and they seemed real to me.  I know, I know ‘Victory For The Shipyard Girls’ is a work of fiction but because I so enjoyed this book, the storylines and the characters came alive.  If I closed my eyes, I could imagine the places, the storylines and the characters playing out in my head.  I am even picturing who should play which character when the series is adapted for television.  I can’t believe that it hasn’t been snapped up for development already.

I have to be honest and say that I adored where the series is set but then I am biased.  I currently live in the North East and to me it’s the best area of the country. The area is brimming with stories of how women overcame the toughest of times.   ‘The Shipyard Girls’ is set in Sunderland, County Durham, which is a place very close to my heart.  At the time this book is set, Sunderland was classed as being in County Durham and to borrow a phrase from my late father ‘Sunderland always was and always will be in County Durham.  There was never any of this Tyne & Wear rubbish’.  I never knew my grandparents and reading books such as these somehow makes me feel closer to them, as they were from up that way.  I loved the regional dialect and I even found myself repeating some of the dialogue between the characters in a Mackem accent.  A Mackem is a native of Sunderland.

In short, it’s fair to say that I adored reading ‘Victory For The Shipyard Girls’ and it is another fabulous instalment of the series.  ‘The Shipyard Girls’ series just keeps getting better and better.  As I indicated above, I can’t believe that ‘The Shipyard Girls’ has not yet been picked up for television adaptation.  It would be perfect for adaptation and has the potential to be just as popular, if not more so, than ‘Call The Midwife’.  I would definitely recommend this author and her books to other readers.  The score on the Ginger Book Geek board is a massive and well deserved 5* out of 5*.