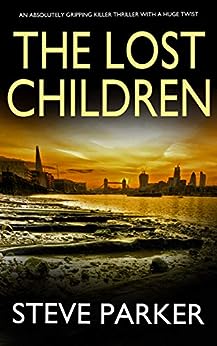 A MAN SHOT DEAD IN THE STREET. BUT WHAT THE POLICE FIND NEARBY IS FAR WORSE.

An elderly African man is found dead in the street, shot through the head. The killing has the hallmarks of a professional assassin. Dumped in a waste bin next to the dead man is the dismembered torso of a child.

They must hunt down a ruthless killer with connections that go far beyond anything they’ve ever encountered before.

Within days they know who committed the murders and why, but are left reeling when they are ordered by the government to release the child’s killers.

FINDING THE KILLERS WASN’T THE HARD PART. BRINGING THEM TO JUSTICE IS.

I loved the first book in the series ‘Their Last Words’ featuring Detective Superintendent Ray Peterson and Detective Inspector Johnny Clocks and I have impatiently been waiting for the second book in the series.  Well the wait is over as ‘The Lost Children’ by Steve Parker was published by Joffe Books on 26th August 2018.  When I was able to grab a copy ,I did and I dived straight in.  Bloody hell what an amazing read it is.  I absolutely loved it but more about that in a bit.

I have to say that I like Detective Superintendent Ray Paterson and I even like Detective Inspector Johnny Clocks even if he is occasionally un-PC and very undiplomatic.  Paterson is a career policeman, who has recently returned to work following an incident where he shot and killed a serving police officer.  The killing was justified but that doesn’t help the fact that Paterson feels incredibly guilty and he thinks that all other officers will hate him.  To say that Paterson is thrown in at the deep end on his return to work is an understatement as he is asked to investigate the shooting of a man through the head, but it also emerges that a dismembered corpse of a child has been found close by in a skip.  This upsets Paterson and strengthens his resolve to catch those responsible for the death of the man but above all for the poor bairn.  Paterson & Clocks are the sort of policemen who achieve results, even if they don’t always play by the rules or even if they bend the rules a little bit.  Clocks strikes me as being a bit of a hard nut but that’s only on the surface.  Dig a bit deeper and you will find a soft centre.  One of Clocks’ failings is that he often opens his mouth before he puts his brain in gear and that can get him into trouble.  He also doesn’t seem to notice when he has upset somebody and some of his questioning can be pretty blunt and insensitive.  Together Paterson and Clocks make a great team.

It’s definitely true to say that this is a difficult read.  I don’t mean that it is badly written or anything like that as it’s fantastically written.  The difficult bit has to do with the subject matter that I know will not be suitable for everybody.  The book discusses child murder, child abuse, ritualistic sacrifices and paganism to name but a few of the difficult subjects that are discussed.  Certain parts of the story are based on real life events when a little boy’s torso was found in the River Thames.  I think that we owe it to those that have suffered and have become victims to raise awareness of such crimes and ensure that this sort of thing isn’t allowed to happen again.

‘The Lost Children’ starts with a bang (literally) and in a way that is going to remain fresh in my memory for a long time to come.   A man is shot in his head, which takes half of his skull off.  The book hits the ground running and maintains the pace throughout.  Reading ‘The Lost Children’ was much like watching one of those Hollywood blockbuster films where one nasty thing happens after the other and you are waiting for the good guys to ride to the rescue.

I was hooked on this book from the moment I got my hands on a copy, never mind from when I began to read.  Reading this book soon became a serious addiction.  Once I picked the book up, I found it very hard to put the book down again.  It wasn’t as if the book was glued to my hand but it might as well have been because the book came everywhere with me.  I begrudged having to put the book to one side and if I did have to put the book to one side then I was counting down the time until I could pick it up again.  I binge read this book in a couple of sessions and I am so glad that I did because it gave me an inkling of the sense of urgency that is attached to cases such as the ones in this book.  The writing was so convincing and authentic that I did feel as though I was a member of the team investigating the case.  I found that I was interacting with the book and trying to butt in with my own thoughts and feelings.  I had to remind myself that this book was fiction and not real life.

‘The Lost Children’ is one hell of a rollercoaster ride of a read, which will put you through the emotional wringer.  There were twists and turns aplenty and moments that quietly snuck up on you and hit you in the face like a frying pan to the face.  On more one occasion I couldn’t believe what I had just read and I had to re-read certain parts of the book to make sure that I wasn’t imagining things.  Several times throughout the book, events left me shocked, stunned and outraged.  ‘The Lost Children’ is a book that will play with your emotions, it will make your blood pressure rise and it will certainly get your adrenaline going.

To conclude it’s fair to say that I 100 % loved reading ‘The Lost Children’.  Not an easy read granted but a necessary read to raise awareness of such despicable crimes and events.  I can’t wait to read what Steve Parker comes up with next.  Here’s hoping that we don’t have too long to wait- HINT, HINT.  The score on the Ginger Book Geek board is a very well deserved 5* out of 5*.