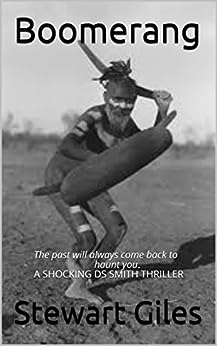 Synopsis
A MAN IS KILLING PEOPLE IN YORK!

Initially the murders appear to be the random acts of a maniac.
Detective Jason Smith is put in charge of the investigation. It soon becomes clear that the murders are all connected to him in one way or another.
All of the killings correspond to events in Smith’s life and the murderer leaves dates at the crime scene which tie up to important dates in Smith’s history. When one of the dates is a time before Smith was even born, he realises he must look deep into the past to find a way to stop the worst spate of murders in York’s long history.
As the countdown begins can Jason catch York’s first serial killer before it’s too late?

I have been a fan of Stewart’s for a little while now.   I have read, reviewed and loved about three of his books so far and I am reading the others in the Detective Jason Smith series to catch up.  I have just read ‘Boomerang’, which is the second full length book in the DS Jason Smith series, and I absolutely loved it but more about that in a bit.

I couldn’t help but take to the character of DS Jason Smith.  He currently works in York and has done for a little while.  Smith is originally from Australia but was sent to Britain to live with his grandmother following Smith’s sister’s disappearance from the beach in Australia.  Smith had a very tight bond with his Granny, although she has now died.  Smith is the sort of boss that I would want to work for.  He is fair, decent and hard working.  He also mucks in to do his share of the workload and he wouldn’t ask his staff to do anything that he wouldn’t be willing to do himself.  He has the respect of his team and he would have your back.  Smith gets on with most of his colleagues but there are a couple of colleagues who rub him up the wrong way at times and he takes delight in winding them up too.  Smith is a bit of a rebel too and he shows a healthy lack of respect for his superior officers.  The cases in ‘Boomerang’ become personal to Smith as the murderer leaves his calling card in the form of numbers written on the soles of the feet of the victims.  These numbers resemble dates and are particularly personal to Smith, although you don’t immediately discover what that significance means.

Bloody hell ‘Boomerang’ is certainly one hell of a rollercoaster ride of a read.  I was gripped from the first word on the first page and Smith had me under his spell until I read the last word on the last page.  The story starts in a memorable way and you can’t help but carry on reading to discover how the Vietnam War is connected to what is happening in present day York.  The more I read, the further I got into the story, the more curious I became about what was going to happen next and the more I had to read on.  I tried to ration how much I read at once but that intention was soon thrown out of the window.  I was so addicted to reading ‘Boomerang’ that I didn’t realise the speed with which I was getting through the book.  Before I knew what was happening I had finished the book, which I had mixed feelings about.  Don’t get me wrong I was pleased to finish because at least I knew how this Smith investigation ended but I was enjoying the storylines, the location, the author’s writing style and the characters so much that I just wanted the book to continue.  Reading this book was much like being on an at times scary and at times unpredictable rollercoaster ride with twists and turns aplenty.  ‘Boomerang’ is one of those books that certainly kept me guessing.  I smugly thought that I had worked out who the killer was and what their motivation was, only to discover that I was wrong and the murderer was somebody else entirely.  Whoops.

In short I loved reading ‘Boomerang’ and I would definitely recommend it to other readers.  The series featuring DS Jason Smith just keeps getting better and better.  I can’t wait to read the rest of the books in the series.  The score on the Ginger Book Geek board is a very well deserved 5* out of 5*.