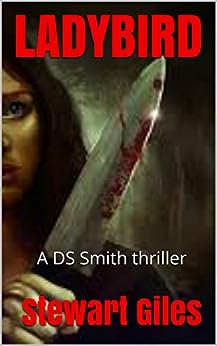 The Ghoul is arrested for Murder and Jason Smith is on sick leave.

Detective Sergeant Jason Smith is days away from the end of his sick leave after a case that almost cost him his life when he gets a call from an old friend. His friend has been arrested for the murder of a student. He wants Smith to investigate the murder and prove his innocence. Smith is persuaded return to work. The student was killed with a bread knife. Ladybirds were scattered on his dead body.

When another man is found dead with ladybirds on his body, Smith enlists the help of an insect doctor, the enigmatic DR Karen Wood, to try and understand the significance of the ladybirds. As Smith gets drawn closer to this mysterious woman and more and more men wind up dead with ladybirds on their bodies Smith quickly realises that Dr Wood is not who she seems to be.

Smith and his team unearth a terrible secret from twenty years earlier; somebody wants justice and, as more and more men die, Smith realises he is running out of time to find out who.

I actually finished reading ‘Ladybird’ a couple of hours ago but it’s only now that I can try to put into words what I feel about it.  I don’t mean that in a bad way but there was so much going on in the book that I don’t really know where to start.  I absolutely loved, no make that adored reading ‘Ladybird’ which is the third full length novel to feature DS Jason Smith.

‘Ladybird’ features a different Jason Smith to the one in the previous two books.  He is on sick leave following the horrendous events in ‘Boomerang’, where his partner had her throat slashed.  She passed away and as well as having to come to terms with his loss, he felt awful that he wasn’t able to help her.  Smith feels a bit disillusioned with the police force and he isn’t sure that he can go back to it.  He has had a taste of what normal life feels like.  However, something happens to ‘The Ghoul’, who sends out an SOS to his old friend Smith.  The saying ‘once a policeman always a policeman’ springs to mind because Smith is unable to resist the temptation of taking part in the investigation and to prove his friend’s innocence.  Smith is still the stubborn, determined, nosy police officer that he always has been.  If Smith has a gut feeling about a case then he goes with his gut, even if common sense and the evidence say the opposite.

Bloody hell this was one hell of a dramatic, sometimes gory rollercoaster ride of a read.  ‘Ladybird’ is brilliantly written with a superb plot designed to grab your attention from the start.  The story hits the ground running and maintains the pace throughout.  Reading ‘Ladybird’ become something of an addiction for me.  I would pick my Kindle up with the intention of only reading a couple of chapters and then seven chapters later I was still reading.  I was so absorbed by the investigation, the author’s writing style and the convincing characters that I didn’t realise just how quickly the page numbers and the time was flying past.  Before I realised what was happening I had cleared over half of the book and it wasn’t long until I had finished reading the book.  I had mixed feelings about finishing ‘Ladybird’.  Don’t get me wrong I was pleased to finish because I knew how the investigation concluded but I was enjoying the author’s writing style, the story, the investigation and the characters so much that I just wanted the book to continue on and on.  There were more twists and turns to this story than you would find on a Snakes & Ladders board.  Just when you thought that the action had settled down then off the book would go again.  I barely had time to collect my breath before the action kicked off again.  There were times when I almost had to read through my fingers because I feared what was over the page and how it impacted on Smith and his team.  Then I gave myself a kick up the bum because I knew that if I wanted to find out how the story ended.  Certain details are rather gruesome but for me, it’s not gratuitous gruesomeness.

I also loved the fact that ‘Ladybird’ is set in my neck of the woods- the North East of England.  Well ok it’s set in York which is on the outer limits of the North East boundary.  It was lovely to read about a place with which I am familiar and somewhere I know my way around.

Oh my word, ‘Ladybird’ is one hell of a read.  It’s the third full length book in a series, which just goes from strength to strength and just gets better and better.  I wholeheartedly recommend the DS Jason Smith series and the author Stewart Giles to other readers.  The score on the Ginger Book Geek board is a very well deserved 5* out of 5*.