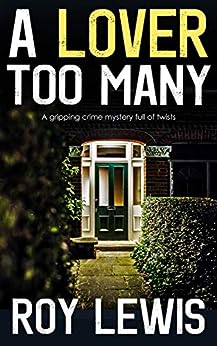 Peter Marlin’s wife is found strangled and he becomes the prime suspect. She’d only just returned from an unexplained absence of several months. And during that time, Peter had found a new lover. Everything points to the husband but there’s no real proof.

Inspector John Crow is called in to help the local police. But his new colleagues aren’t keen on an outsider. And Crow must solve the case before anyone else dies.

To my shame, prior to being invited to take part in the blog tour for ‘A Lover Too Many’, I hadn’t actually heard of Roy Lewis before.  Well let me tell you, I have certainly heard of him now.  I love a bit of nostalgia and so I picked up the book and eagerly dived straight in.  I was not to be disappointed either because I loved reading ‘A Lover Too Many’ but more about that in a bit.

Peter Marlin is the main character we come across initially.  His wife has died and he attends his wife’s inquest at Coroners Court, where the Coroner rules that Peter’s wife was murdered.  Of course the finger of suspicion points at Peter in a big way.  His life seems to start to fall to pieces from then on.  He loses his job, people go out of their way to avoid him and he is constantly viewed with suspicion.  When Inspector John Crow is brought into the story, Peter views him with suspicion as he thinks that Crow will just confirm what everybody else is thinking.  How little does he know…..  Inspector Crow is one of those police officers who go where the evidence is taking him and he isn’t swayed or influenced by public opinion.  Crow is thorough, clever and above all he is honest.  What will Detective Inspector Crow decide?  Is Peter Marlin guilty of his wife’s murder?  What will the verdict be?  Well for the answers to those questions and more you are just going to have to read the book for yourselves to find out as I am not going to tell you.

It took me a little while to get into this book because of the way it is written.  It’s not that the book is badly written as that couldn’t be further from the truth.  I find it to be very well written.  This book was originally printed at the end of the 1960s when language, attitudes and writing styles were so much different to those that we have today.  So when I got used to Roy’s writing style and the language he used, I really did get into this book and then some.  Boy oh boy.  I became seriously addicted to reading ‘A Lover Too Many’ as I was desperate to find out if Peter did kill his wife.  I had my own suspicions as to what had happened but I was wrong.  The more I read, the more I got into the story and the quicker the pages turned.  I didn’t realise how quickly I was getting through the book until I looked up to check and saw that I was two thirds of the way through the book, which I was so disappointed about.  I was enjoying the story and the characters so much that I just wanted the book to continue.  I was so gripped by the writing that I began to interact with the book.  Before anybody says anything, yes I know it’s a work of fiction but if I am enjoying a book, I tend to immerse myself in the book and I live the story.  At times I felt like I was Crow’s unpaid and invisible assistant.

It’s true to say that I did enjoy reading ‘A Lover Too Many’ and I look forward to reading more of Roy’s books.  I can’t wait to read the next instalment in the series featuring Detective Inspector Crow and here’s hoping that we don’t have too long to wait.  The score on the Ginger Book Geek board is a very well deserved 5* out of 5*.