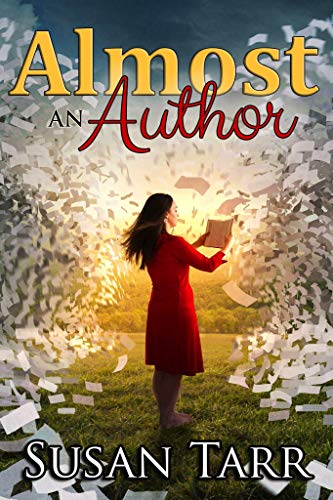 When a chance meeting with a local publisher outside a small bookshop results in all three of her manuscripts being signed, Ruby Wright thinks she has it made. Already she sees images of herself wearing dark glasses, being mobbed by fans clamouring for her latest blockbuster…

Little does Ruby know, but her ditsy publisher is a charlatan who has no more idea about publishing than Ruby does. Pretty soon Ruby is broke.
She has no IT experience so depends heavily on her nerdy flatmate, Hunter, whenever her computer fails her. He has enough of his own issues to deal with—he is studying for his final law exams. She bribes him with a dog she found on the side of the road, then Panforte, which chips his tooth, and a couple of Axolotls until he finally gives in and helps her. But Ruby’s life is filled with disaster…

I have a confession to make- yes yet another one.  Prior to being invited on the blog tour for ‘Almost An Author’ , I haven’t come across Susan Tarr before.  Big mistake.  Well I have certainly heard of her now.  ‘Almost An Author’ is certain a great introduction to her work.  I thoroughly enjoyed reading it but more about that in a bit.

I alternated between wanting to hug Ruby Wright and wanting to slap her with a wet fish.  She is one ambitious woman, who has a dream of becoming a best selling author and I applaud her for having the courage to follow her dreams.  She has visions of being the next big thing.  Her desire to become an author clouds her judgement somewhat because she accepts a woman on face value, who is claiming to be a literary agent.  Their meetings are never anywhere you would expect a serious meeting to be, the agent does a disappearing act and when Ruby does get to talk to her, she is very vague on details.  She fobs Ruby off with one excuse after another but Ruby believes what she is told.  I really felt for Ruby but at the same time I couldn’t believe how gullible she was being.  Ruby gets a lodger to share the rent for the flat and she borderline stalks him.  I wasn’t sure if she wanted to get with him or scare him off completely.  He’s a geek and knows all sorts of useful stuff that Ruby finds fascinating.

I knew that this book was going to be funny by the time I got to the bottom of the first page.  I did find that I chuckled away to myself at certain things that Ruby ended up doing.  She means well but things have a habit of going wrong and she does get herself into some scrapes.  I soon became hooked on reading ‘Almost An Author’ and I didn’t want to put it down.  It was an easy book to read, which was the distraction I needed from the pain I was in.  Before I knew it, I was over halfway through the book but because I was so focused on the book and so wrapped up in the story I didn’t realise the speed with which the page numbers were turning.  It didn’t take me too long to finish the book and I was so disappointed when I finished the book.  I was enjoying the story, the characters and the author’s writing style so much that I just wanted the book to continue for a lot longer.

In short, I really, really enjoyed reading ‘Almost An Author’ and I would definitely recommend it to other readers.  It’s a light hearted read with lots of comedy bits and a wide variety of characters.  The score on the Ginger Book Geek board is a well deserved 4* out of 5*.