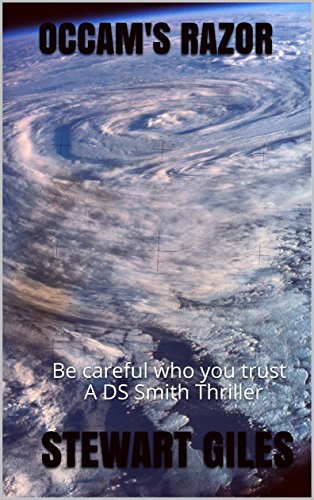 A football player is shot dead in front of a packed crowd of people.

DS Jason Smith is put in charge of the investigation. The murder weapon is found in a house across the road from the football ground. It is a rare Russian army issue sniper rifle. As the investigation hits dead end after dead end, two government agents arrive and take over, pushing Smith and his colleagues to the side. As more people die Smith quickly realises these agents are not who they claim to be. He is forced into the dark world of these phantoms and he finds himself at the mercy of his old nemesis; the man who kidnapped his sister years earlier.

I have been a fan of Stewart’s books for a little while now.  I have read, reviewed and loved each of his books that I have got hold of.  I just love the series featuring DS Jason Smith and I devour (well not literally but you know what I mean) each new instalment of the series as soon as I can get my hands on a copy.  I have been (im)patiently waiting to read ‘Occam’s Razor’ for what feels likes ages, but in reality was only a matter of weeks.  The wait is over and bloody Nora what a flipping fantastic and action packed book it is.  I absolutely flipping well loved it but more about that in a bit.

What can I say about DS Jason Smith?  I have been a fan of Jason’s from the first book in the series and I have developed something of a soft spot for him.  Smith is an Australian, who moved over to England to live with his beloved Grandmother, following the disappearance of his sister.  Smith had a very close relationship with his Gran and I got the impression that she was both mother and grandmother to him.  Naturally he was devastated when she died but her influence lives on.  Smith has been a policeman for some years now but he isn’t your usual, play by the rules sort of policeman.  Oh no, Smith is the sort of police officer who gets results even if it means bending the rules slightly.  Smith is like a dog with a bone in the sense that if something doesn’t seem right to him then it usually isn’t and he will investigate until his curiosity is fully satisfied.  This often gets him into trouble with his bosses as he persists with his investigation even when he is warned off by his bosses, by people in suits and by sinister men.  Smith does drink a fair amount but I sense that for him drinking alcohol is his way of coping with the horrors he has to face every day.  He is a man with a sad past and he has his demons.  That said I still have a soft spot for DS Jason Smith and I can’t wait to read the next book to see what trouble he gets himself in.

OMFG this was one seriously flipping fantastic rollercoaster ride of a read.  The author’s writing style is such that he manages to entice you into his web from the first word on the first page and before you know it you are hooked on the book with no chance of escape- not that I would want to escape from DS Jason Smith in any case.  That’s what happened to me anyway.  It didn’t take me long at all to get into the book and because I was familiar with particular characters, I felt as though I was reuniting with old friends.  I became addicted to reading ‘Occam’s Razor’ and I was always in need of my fix.  I would pick the book up only intending to read a couple of chapters but several chapters later I was still reading and I felt as though I was a member of Smith’s team.  The pages seemed to fly past at speed and before I realised what was happening I had finished the book which I had mixed feelings about.  Don’t get me wrong I was pleased to finish because I knew how this tricky investigation ended and I knew if Smith survived but I was enjoying the author’s writing style, the story, the characters etc so much that I just wanted the book to continue.  Reading ‘Occam’s Razor’ felt as though I was on one hell of a scary and unpredictable rollercoaster ride with twists and turns aplenty and surprises just around the corner.  On more than one occasion I almost had to read through my fingers because I was dreading turning the page in case it meant that Smith was in danger but then I mentally gave myself a kick because I knew that if I wanted to find out what happened then of course I would have to read on.  ‘Occam’s Razor’ is one of those books that is guaranteed to get the heart racing, the adrenaline pumping and the blood pressure rising.

Can I just say that I absolutely loved the fact that ‘Occam’s Razor’ is set in York in the North East of England, which is where I am from.  I love stories that are set near me and which feature places I am familiar with.  My home town was mentioned and I gave a little cheer when I came across it.

‘Occam’s Razor’ can be read as a standalone but for certain references to past events to make sense and because I am a bit OCD about reading series in order, I would suggest that you read the series in full and in order.  Believe me you won’t regret it.

In short I absolutely blooming loved reading ‘Occam’s Razor’ and I can’t wait to read the next book in the series.  DS Jason Smith is one of my all time favourite characters in crime fiction and Stewart Giles is right up there in the top 10 of my favourite and must read authors list.  I personally think that this series would be perfect for television adaptation and it would be far better than the television adaptation of DCI Banks.  I fully recommend this book, this series and this author to other readers.  The score on the Ginger Book Geek board is a very well deserved 5* out of 5*.  I just wish that I could have awarded it more stars because it really is that good.