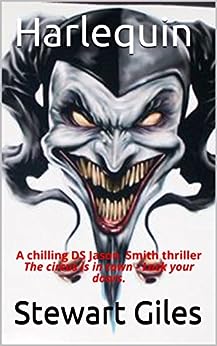 The circus comes to town and children start to disappear.

Detective Sergeant Jason Smith is persuaded to return to work after three weeks of a marijuana induced haze. Forced to endure the leadership of a new DI, the fulsome Bryony Brownhill, Smith is faced with the most difficult investigation of his colourful career.
When the children who vanished are found murdered in various parts of the city, all clues lead to the circus grounds, but Smith and his team are met with a sinister silence everywhere they turn. Smith digs deeper and discovers the cause of this silence; the chain of events that led up to the vile murders that have shattered the hearts of the people of York.

I have been a fan of Stewart’s books for a little while now.  The series featuring DS Jason Smith goes from strength to strength.  Each time a new book is released I clear the decks and make reading it a top priority.  I absolutely loved ‘Harlequin’ but more about that in a bit.

I can’t help but take to DS Jason Smith even if at times he makes me feel like slapping him with a wet flip flop.  He’s an Australian, who was sent to live with his grandmother following the disappearance of his sister.  His grandmother became both mother and grandmother.  Smith enjoyed a very close relationship with his grandmother and he was naturally devastated when she died.  Smith seems to have had more than his fair share of knocks but he has dealt with them by picking himself up and carrying on.  The opening of ‘Harlequin’ sees Smith recovering from the fire that destroyed his house.  Although I don’t condone taking drugs, I could see why Smith would want to escape for a few hours and I had a giggle at how he was affected by the smoking of an illegal substance.  Smith does not want to go back to the police service but he is tempted back by the latest difficult case facing the York Police.  The circus has come to town and children are disappearing.  Is there a link?  Will Smith remain with the police or will he go elsewhere?  Well for the answers to those questions and more you are just going to have to read the book for yourselves to find out as I am not going to tell you.

For me, ‘Harlequin’ is simply unputdownable.  Mind you that has been the case for me with all of the books of the DS Smith series so far.  The author’s writing style is such that you can’t help but be drawn into the story and Stewart reels you in like a fisherman would reel in a fish.  Before you know it, you are addicted to the story and you just can’t stop reading.  That was certainly the case for me.  My Kindle wasn’t exactly glued to my hand but it might as well have been because it came everywhere with me.  Reading ‘Harlequin’ soon became an addiction for me and I had to get my ‘fix’.  If I had to put the book down for any reason, then I was counting down the time until I could pick it up again.  The pages seemed to pass by in a blur and before I realised what was happening I had finished the book, which I was gutted about.  I was enjoying the story, the characters and the author’s writing style so much that I just wanted the book to continue.  The story hits the ground running and maintains the pace throughout.  At times reading ‘Harlequin’ felt like being on a rather scary and unpredictable rollercoaster ride with lots of twists and turns throughout.  Blimey oh riley there were times where I almost had to read through my fingers because I feared what was going to happen next.

In short I absolutely adored reading ‘Harlequin’ and I can’t wait to read what Stewart comes up with next.  The series featuring DS Jason Smith just keeps getting better and better and it goes from strength to strength.  I wholeheartedly recommend this author and this series to other readers.  The score on the Ginger Book Geek board just has to be 5* out of 5*.