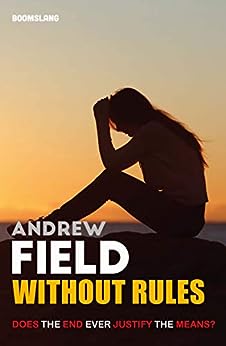 When a professional hitman turns up at Candy’s World to hide, China Mackie discovers her plan to flee from her abusive father has tragically backfired. A gruesome bloodbath has left four people dead on the streets of a northern city centre on a cold wet Sunday morning. China knows she’s next to die. Unless she is more ruthless than everyone else. She must improvise fast. Seduce her father’s assassin. Plead her case so he helps her escape in a fight to the death where rules don’t matter but the consequences do.

I have another confession to make.  Prior to being invited to take part in the blog blitz for ‘Without Rules’, I hadn’t come across Andrew Field before.  Well ladies and gents, I certainly have come across him now.  ‘Without Rules’ was my first of his books that I have read but it certainly won’t be the last.  I really enjoyed it but more about that in a bit.

I have to say that I felt for the character of China although I can’t say that I actually liked her all that much.  She is a young woman, who has had an unpleasant history thanks to an abusive father.  She tries to escape but the plan backfires much to her horror and four people have been killed as a result.  She thinks that she has now lost that window of opportunity to escape from her father’s clutches.  China really is fighting for her survival.  China is scared, she is wary and she thinks that she has run out of other options.  She soon comes up with a back up plan and her plan to escape is still on even if it means that she has to do some unpleasant things to achieve her aim.  I kept crossing my fingers that she would escape and that her father would get what was coming to him.  What happens?  Well you are just going to have to read the book for yourselves to find out because I am not going to tell you.

In my opinion ‘Without Rules’ is very well written and the author is rather crafty.  Let me explain.  The author’s writing style is such that you can’t fail to be drawn into the story and much like a fisherman, he  reels the reader in.  Wham, before you know it you are swept along by the story and you care about what happens to the different characters.  That’s what happened to me anyway.  I was so convinced by the story that had I been able to, I would have jumped inside the pages of the book to give certain people a few dozen slaps across the face with a wet fish for what they did or for what they said.

Wowzers this was one hell of a rollercoaster ride of a read.  For me ‘Without Rules’ is an unputdownable page turner of a book.  It wasn’t exactly glued to my hands but it might as well have been because it came everywhere with me and I couldn’t bear to be parted from it.  If, for whatever reason, I had to put the book down, then I looked forward to picking it up again.  It didn’t take me long at all to get into the story and because I was desperate to find out how the story ended and what fate had in store for China, I couldn’t stop turning those pages.  I would pick the book up only intending to read a couple of chapters or to read for a few minutes but those intentions soon flew out of the window and I would still be reading half an hour later.  This book had the perfect mix of drama, action and excitement.

In short I really enjoyed reading this story and I would definitely recommend it to other readers.  I, for one, will definitely look forward to reading more from this author.  The score on the Ginger Book Geek board is a very well deserved 4* out of 5*.