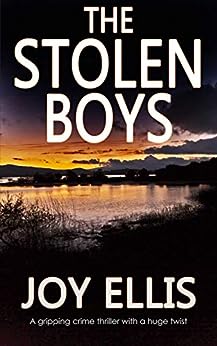 A crime wave has hit town. The target is a highly sought-after brand of streetwear called Hybird X, clothing that costs a fortune and resells for unbelievable prices. Houses are burgled, kids mugged on the streets . . . and finally a young man dies, all for the sake of his shoes.

Then another boy’s body is found in a pile of rubbish. Meanwhile illegal steroids are flooding the streets. And there are dark movements on the marshes.

CLOTHES THAT PEOPLE WILL KILL TO OWN

A shadowy figure called Darke and his teams of young criminals seem to be behind it all.

Detectives Jackman and Evans must take on a fiendish criminal, while still haunted by Alistair Ashcroft, the serial killer they never caught.

I have been a fan of Joy’s books for months and months if not years and years.  I have read and loved each and every book that she has released.  I eagerly and (im)patiently wait for her next book to be released.  Well the wait is over because the next instalment in the series featuring Detective Inspector Jackman and Detective Sergeant Marie Evans, called ‘The Stolen Boys’ was released on 9th October 2018.  Bloody nora it is one hell of a read and I loved it but more about that in a bit.

I love the pairing of Detectives Jackman and Evans.  They work well together but equally they can work on their own.  They are totally at ease in each other’s company and they have each others back.  They are extremely loyal to each other as well.  In fact it appears as though Jackman & Evans are like a married couple only without the sex.  Both of them work well with each other but equally they can work just as well on their own.  This book sees them investigating the whereabouts of Alistair Ashcroft, who is actually a serial killer, who has managed to evade capture up until now.  At the same time they are asked to investigate a case where it appears that somebody has been killed literally for the clothes on their feet.  Will Jackman & Evans find Mr. Ashcroft?  Will Jackman, Evans and the team find out who is responsible for the killings?  Well for the answers to those questions and more you are just going to have to read the book for yourselves to find out as I am not going to tell you.

”The Stolen Boys’ is certainly one hell of a read and topical too in a society where possessions are often treasured more than life itself.  Yes the nature of the crimes are rather gruesome to say the least but the author has in no way glorified violence and the violence is not gratuitous in any way.  In fact the violence is more implied and left to the reader’s imagination.  The author’s writing style is such that you can’t fail to be drawn into the story and before you know it you are hooked on the book.  The author is much a like a spider tempting its prey into its web- once you are in, you can’t get out.  For me, the plot hit the ground running and maintained the pace throughout.  For me ‘The Stolen Boys’ really is a ‘CPID’ (can’t put it down) book.  The book wasn’t exactly glued to my hands but it might as well have been because I couldn’t put it down and it came everywhere with me.  I just couldn’t bear to be parted from the book and if I did have to put it down, I did so begrudgingly, whilst counting down the time until I could pick it up again.  I was completely wrapped up in the story and the investigation.  I binge read the book over the course of a couple of days which so worked with this book because it gave me a real sense of the intensity of the police investigation.  The author’s writing style and vivid descriptions really made me feel as though I was a member of the investigating team.  I found that I began to interact with the book.  Before anybody starts, I know that the book is a work of fiction but if I am convinced by the story and the writing is fantastic, then I ‘live’ the story.  I found that I was shouting out random comments or giving suggestions to the police on how to proceed in the investigation or the questions that needed  to be asked.  Get me- I watch every police television series (American & British) and I think I know it all!!  Just call me Ginger Book Geek Marple-Poirot.  Lol.

I absolutely loved reading ‘The Stolen Boys’ and I wholeheartedly recommend it to other readers.  I can’t wait to read the next one in the series.  The score on the Ginger Book Geek board is a very well deserved 5* out of 5*.