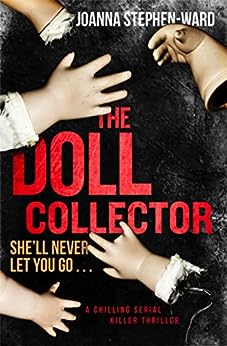 A couple and their young son burn to death in a house fire.

A girl dies from a nut allergy.

A woman falls under a train during the rush hour.

An accountant falls down the steps to his basement.

Their deaths appear to be accidents but Gloria knows they were murdered because she murdered them. And every time Gloria kills she buys a doll.

But how many dolls will she need to keep her satisfied?

When Gloria takes a room as a lodger her behaviour starts to spin out of control. Gloria wants love and happiness and friendship and she will do anything she can to get what she wants…

I must admit that prior to being invited to take part in the blog tour for ‘The Doll Collector’ I hadn’t actually come across Joanna Stephen-Ward before.  Sorry Joanna.  Rest assured though I have certainly heard of her now and I loved reading ‘The Doll Collector’ but more about that in a bit.

I can honestly say that there was not one character in this book that I can truthfully say I warmed to nor did I even like any of them.  The most sinister of the characters for me just has to be Gloria.  Without giving too much away, she is one of those women that you wouldn’t want to turn your back on because she would probably knife you in it and she gives me the heebie jeebies.  I can’t put my finger on exactly why she does but I find her to be very chilling in that she can switch from nasty to nice and back again with frightening ease.  Gloria hasn’t exactly had an easy life but to me that’s no excuse for what she gets up to.  Gloria ends up sharing a flat with a lad, who hasn’t had it easy either.  She seems to take over and certainly gets him and his house in shape although I do get the slight impression that she scares the crap out of him a bit.  She certainly scares me.

Oh my gosh, ‘The Doll Collector’ is one of those books that grabs your attention from the start and much like a fisherman landing a catch, the author reels you in.  I ended up getting so caught up in the story that I couldn’t stop reading.  It was almost as if the book had cast a spell over me and it didn’t let me go until the moment I closed the back cover.  I had to keep reading to see what further mayhem Gloria would cause and whether or not she would be caught.  The pages turned over so fast that it was almost as if they were turning themselves and I seemed to charge through the book rather quickly for me.  I was so into the story and enjoying the characters so much that I didn’t realise how quickly the time was passing or how quickly the pages were turning.  ‘The Doll Collector’ is well plotted and well written with twists and turns aplenty.  Reading ‘The Doll Collector’ is much like being on a very scary and unpredictable rollercoaster ride with no idea in which direction the story/ ride is going to take you next.  There were also moments that almost had me hiding behind a cushion or almost had me reading through my fingers because I feared what was going to happen next.  I am a bit of a wimp in that respect.

In short I really enjoyed reading ‘The Doll Collector’ and I would recommend it to other readers.  I can’t wait to read what this author comes up with next.   Here’s hoping that we don’t have too long to wait.  The score on the Ginger Book Geek board is a very well deserved 4* out of 5*.