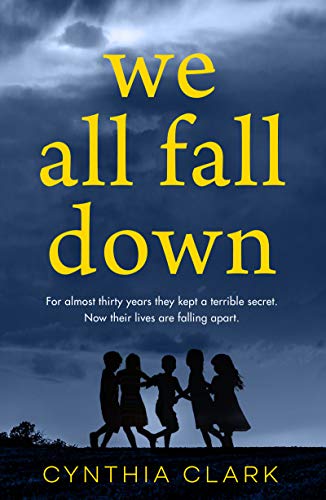 Many years ago orphans Bea, her brother Sebastian, Helen, Sandra and John lived together in a home, with their carer Miriam. But Miriam didn’t care at all. If you asked the children, they would have said that Miriam hated them. And it’s no fun living with someone who hates you, so the children decided to do something about it… Then a terrible accident changed everything, and the children were ripped apart from each other.

Many years ago Ronnie Moss made a mistake he can never take back, no matter how much he wishes he could, so instead he runs for his life. But he can’t run forever.

Many years later the secrets of the past are finally being revealed, and nothing will ever be the same again.

I must admit that prior to being invited to take part in the blog tour for ‘We All Fall Down’, I hadn’t actually come across Cynthia Clark before.  Now I am left asking myself how in the world have I not heard of her before now and how have I missed her first book.  The synopsis and the cover of the book really appealed to me and so without further ado I started reading.  Overall I did enjoy it but more about that in a bit.

I must admit that there were certain of these characters that I could have quite cheerfully slapped a few dozen times around with the chops with a wet flip flop.  The more painful the better.  One such character is Miriam, who is the so-called foster parent of a group of children but to say she is a sadist is a huge understatement.  Honestly if I could have confiscated that frying pan and given her a dose of her own medicine then I would have done.  That’s just one instance of what she gets up to.  Another such character is Ronnie Moss, the lorry driver who causes an horrific accident but who does a runner before he is caught.  If I could have jumped inside the pages of the book to box him around the ears and frogmarch him to the police station myself then I would have done.  The ones I felt most sorry for were the foster children under Miriam’s care.  If I could have jumped inside the pages of the book to give them all a hug then I would have done.  If there’s one thing that I hate, it is child abuse and effectively this is what Miriam does.

I have to be honest and say that it took me a fair while to get into this book.  To start with there are some pretty graphic details given about the sadistic treatment that Miriam dishes out that makes for some pretty uncomfortable and distressing reading and I admit that I did wonder if I should stop reading.  That thought only lasted for a second or two.  I am so glad that I persevered in reading the book because in the end I did enjoy it.  As the book continued, I did feel drawn into the story and I ended up becoming addicted to reading it.  I just had to keep reading to see if Ronnie Moss ended up having to pay for what he did and if the children (or adults as they are in the latter half of the book) ended up living happy and fulfilling lives.  The story gathered pace and momentum and I seemed to race to the end.  Reading this book was much like being on a scary and unpredictable rollercoaster ride with a  fair few twists and turns.  I also loved the psychological aspect of this book

Overall I did enjoy reading this book and I would definitely recommend it to other readers.  A note of warning though, some people might be upset by the details of Miriam’s abuse of the children so be prepared.  I will definitely be reading Cynthia’s first book and I look forward to reading any of her future books.  The score on the Ginger Book Geek is a well deserved 4* out of 5*.