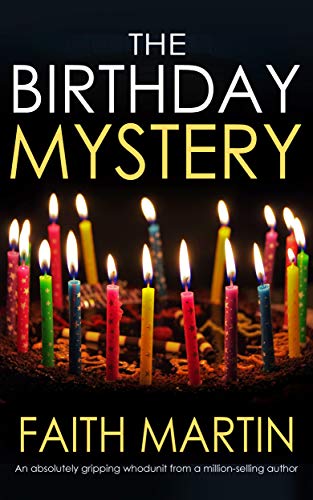 She arrives at their parents’ country house and is immediately met by the police. A young man has drowned in the pond. Was it an accident or murder?

But the birthday party goes ahead. Then just after midnight, everyone gathers for a champagne toast . . . and one of the guests falls down dead. The police are baffled and there is a whole party full of suspects.

When it comes to someone adding the extra ingredient of poison to her own precious recipes, Jenny isn’t going to take it lying down. She has a reputation to protect.

Jenny Starling won’t stop until the murderer is found.

I was first introduced to Faith Martin’s writing, when I was invited to take part in the blog tour (by the lovely Jill Burkinshaw) for the second book in the series featuring DI Hilary Greene, also published by Joffe Books.  Since that time, I have become a huge fan of hers.  I have read each and every book of hers that Joffe has released.  When I heard that she was releasing a new series featuring a new female lead, I knew that I just had to drop everything to read it.  I was not to be disappointed either because I really enjoyed reading ‘The Birthday Mystery’ but more about that in a bit.

The new female lead in this series is called Jenny Starling, who is a caterer.  Trouble seems to follow her around because she turns up and people start dying in mysterious circumstances.  She is a bit like Jessica Fletcher from ‘Murder She Wrote’ in that respect.  Jenny certainly stands out because she is rather tall for a woman and she is well built as it were.  Put it this way, once you have met her, you certainly won’t forget her.  She seems to intimidate people but I wasn’t sure if that was because of her size or because of the way she speaks to people or the confidence that seems to pour out of her.  Jenny certainly doesn’t take any unnecessary crap and she seems to poke her nose into everybody else’s business.  She seems to have a knack that means that people open up to her whereas they wouldn’t necessarily open up to police.

‘The Birthday Mystery is a different kind of read to the Detective Inspector Hilary Greene series.  By that I mean that the main female lead has a different background, a different personality and a different style.  The author seems to have changed her writing style a bit and I did wonder if that was because she was adopting a similar manner in her writing to that of Jenny.  I hope that makes sense.  That said, it didn’t take me long to get used to the different writing style and female lead and pretty much by the time I got to the bottom of the page, I knew that I had found another cracking series with a female lead that I couldn’t fail to warm to.  This book soon became addictive for me.  It isn’t a particularly long book and I seemed to race through it.  I was so focussed on the book, the mystery, the storylines and the characters that I didn’t notice just how quickly the pages were turning- it was almost as if they were turning themselves.  Before I realised what was happening I had finished the book, which I had mixed feelings about.  I was pleased to finish because it meant that I knew how this part of the series finished but I was enjoying the book so much that I just wanted it to continue.  Reading ‘The Birthday Mystery’ was much like being on an occasionally scary and unpredictable rollercoaster ride with several twists and turns along the way.

In short, ‘The Birthday Mystery’ was certainly different and I really enjoyed reading it.  I would say that Jessica Fletcher should move over because there’s a new female amateur sleuth in town.  I would recommend it to other readers but please bear in mind that it is different to the Hilary Greene series.  I can’t wait to read the next instalment of the Jenny Starling series.  The score on the Ginger Book Geek board is 4* out of 5*.