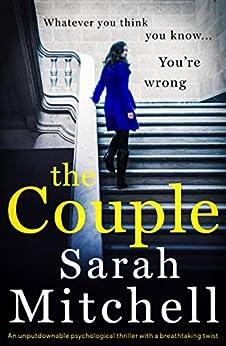 Whatever you think you know… you’re wrong.

Following a whirlwind four-month romance, lawyer Claire and hotel entrepreneur Angus are engaged to be married. Happy and successful, and ready to start their new life together, Claire and Angus find what they believe to be the perfect home.

But when Claire meets Mark, the man selling them the house, he looks eerily familiar. He looks exactly like the man she loved five years ago, the man she couldn’t bear to lose.

As Claire finds herself irresistibly drawn to Mark and crosses lines she never thought she’d cross, Angus’ behaviour becomes increasingly suspicious. Soon Claire doesn’t know whether she can trust Mark, Angus… or even herself.

‘The Couple’ is Sarah Mitchell’s debut psychological novel.  I read and reviewed Sarah’s most recent book called ‘The Lost Letters’, which was released in August 2018.  I thought that the synopsis sounded interesting and so I grabbed a copy of the book and began to read.  Overall I did enjoy reading the book but more about that in a bit.

I have to be totally honest and say that there was not one character in this book that I warmed to one little bit.  That’s not necessarily a bad thing though.  The main character is a lady called Claire, who is a lawyer for the Immigration Department of the Home Office.  There’s no doubting that her job is a highly stressful job and I wouldn’t swap with her for all the tea in China.  Mainly because I am not a lawyer and I had a run in with the Home Office a little while ago but that’s a whole new story for a different time.  We learn that Claire has ‘lost’ her boyfriend Dan.  It isn’t immediately apparent what happened to him but little clues emerge.  She seems to pine after him a fair bit but that hasn’t stopped her from getting engaged to a man called Angus.  The engagement followed what is best described as a whirlwind romance.  Claire goes to view a house, which is owned by a man called Mark, who bears a startling resemblance to Dan.  It’s the resemblance to Dan that sees Claire return to see Mark time and again.  I have to say that I found Claire to be rather annoying and on more than one occasion I felt like giving her a slap across the chops with a wet fish.

To be honest, I found this story a little slow to get going and I didn’t enjoy it at first.  Mainly because I found Claire to be a tad annoying and she had one of those personalities that I can’t stand.  Anyway once I got over the first bit of the book, the story got going and then some.  The story soon gathers momentum and intensity.  I found that the more I read, the more I wanted to read.  I binge read this book over a couple of days and I found it easier to read it in bursts as it were.  Eventually I did become addicted to reading this book and I just had to keep reading because I just had to know how the story ended and what happened to Claire.

‘The Couple’ is well written with realistic but unlikeable characters.  That sounds bad but it really isn’t meant in that way.  The story is written in different periods of time.  The chapters interlink and in the main, the story flowed seamlessly.  I have to admit that I did get confused on occasion as to which period of time I was in but I put that down to the fact that I was tired and had taken some hard core pain relief and that’s no reflection on the book itself.

Reading ‘The Couple’ was much like being on a scary and unpredictable rollercoaster ride with several unexpected  and surprising twists and turns along the way.  I must admit that ‘The Couple’ turned out to be a different book to the one I was expecting.

In short and overall I did enjoy reading ‘The Couple’ and I would recommend it to other readers and especially to those who enjoy a slower pace of story.  I will definitely be reading any further books that Sarah writes.  The score on the Ginger Book Geek board is a very well deserved 4* out of 5*.