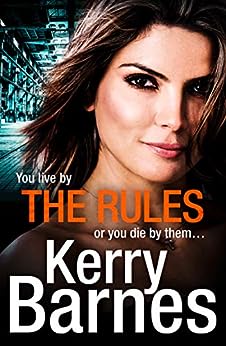 Do you live by the rules, or die by them?

Holed up in prison, Mike Regan is offered a deal – his freedom in exchange for his firm taking down the gang that is supplying a new dangerous drug that has hit the streets. What starts as a game soon becomes a shocking revelation with devastating consequences.

Meanwhile, Mike’s fiancé, Zara Ezra, has her own firm to run. But when the so-called Governor is out to take her down, she has her own decision to make – either fight, run, or write her own rule book…

‘The Rules’ is the second instalment of the new series by best selling author Kerry Barnes.  I have read a couple of Kerry’s books now and I have loved them.  I had high hopes for ‘The Rules’ and I was not to be disappointed.  I thoroughly enjoyed ‘The Rules’ (even if it did scare the doo doo out of me a fair bit) but more about that in a bit.

To be honest, I didn’t warm to any of the characters as they irritated me a bit and scared the living daylights out of me at the same time.  Each seemed to have their own agenda and I was sure that I wouldn’t be able to trust any of them as far as I could throw them.  The beginning of the book focuses on Mike, who is offered early release from prison in return for him and his Firm cleaning up the streets on behalf of the police, whose capabilities have been severely curtailed due to the funding cutbacks.  At the same time the police would turn a blind eye to the activities of Mike and the rest of his crew.  Mike’s fiancé Zara is not exactly having a good time of it either because she and her Firm are under threat from somebody called ‘The Governor’, who wants to take her and the Firm down.  She has a choice to make- does she run, fight or make her own rules up as she goes along.

OMG, ‘The Rules’ was one hell of a read that had me gripped and on the edge of my seat all the way through the story.  ‘The Rules’ is simply an unputdownable book and reading it soon became an addiction.  My Kindle wasn’t exactly glued to my hand but it might as well have been because it went everywhere with me.  If I did have to put the book down for whatever reason, then I would count down the time until I could pick the book up again for my next fix as it were.  I just had to keep reading to see what happened to the main characters.  I had my own theories about what would happen and in some cases I was on the right track but in other cases I was nowhere near the right track.

‘The Rules’ is very well written. The author’s writing style is such that she grabs your attention from the first word and she doesn’t release you from the book’s grip until after you have finished reading.  She has created characters who are believable but at the same time they are menacing.  There are some rather graphic details in the book that made me wince as if it had happened to me.  I hope that makes sense.  After reading this book I can see why people lead a life of crime but at the same time I know that I could never live the criminal’s life.  I am a wimp though and I do not like danger one bit.

Reading this book was much like being on a scary and unpredictable rollercoaster ride with more twists and turns than I could count.  There were also times when I almost had to read through my fingers as I feared what was going to happen next.   See, I told you I am a wimp.

In short, I thoroughly enjoyed reading ‘The Rules’ and I will most definitely be recommending this author and her books to other readers.  I can’t wait to read what Kerry comes up with next.  The score on the Ginger Book Geek board is a very well deserved 5* out of 5*.