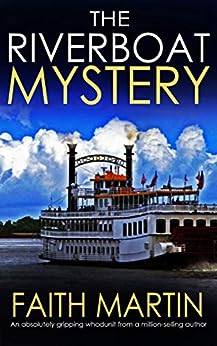 Jenny Starling has a job on a luxury paddle steamer working for a wealthy businessman. All she has to do is cook for his small number of guests. But things quickly turn sour.

Then she discovers the body of one of the passengers in the store cupboard. Who wanted him dead and why?

Jenny will have to ignore many red herrings and follow the clues to get to the bottom of a complex and intriguing murder mystery.

What can I say about Jenny Starling?  Well she is certainly a one off.  She is a cook by trade but she is also an amateur sleuth.  Jenny loves her food, which is blatantly obvious by the way she is described and by the things that she says about herself.  Jenny is certainly plain speaking and she definitely says what she thinks.  She tends to get on with most people even if she is not that keen on them.  Jenny has a nose for trouble and dead bodies seem to pop up wherever she goes.  She is either very unlucky or she is really a serial killer- now there’s an idea for a new series of books.  Just kidding Faith.  Jenny asks the questions that others won’t and her direct approach brings her results.

‘The Riverboat Mystery’ is well written.  As I mentioned at the beginning, this is the third book in the series.  The character of Jenny is well established and her personality is growing on me.  As a result, I found ‘The Riverboat Mystery’ easier to read and more enjoyable.  It didn’t take me long to get into the story and to become addicted to reading the book.  In fact by the end of the second page, I was hooked and I knew that this was going to be one book that I wouldn’t be able to put down.  I just had too many questions that needed answers and I am a nosy parker so I just had to snoop alongside Jenny Starling.  It didn’t take me too long to charge through the book as I binge read it over a day.  At one point the pages were turning that quickly that they were almost turning themselves over.  I soon got to the end of the book, which I had mixed feelings about.  Don’t get me wrong, I was pleased to finish because I knew the who, where, what, how and why of the case but I was enjoying the author’s writing style, the characters and the storyline so much that I just wanted the book to continue.  ‘The Riverboat Mystery’ certainly kept me guessing and kept me on the edge of my seat.  On more than one occasion I smugly thought that I had fathomed out who the killer was and what their motivation was, but I soon realised that I completely had the wrong end of the stick and the killer was somebody else entirely.

The only teensy weeny criticism that I have of this book is the fact that references are frequently made to Jenny’s size and at times she is made fun of because of her build.  It’s almost as if she is being ‘fat shamed’.  I think that I am uber sensitive to this as I was bullied all the way through school for being the size I was and I strongly dislike the focus being on how big a person is or how ‘healthy’ their appetite is.

Overall and in short, I absolutely loved reading ‘The Riverboat Mystery’ but then the book is written by the best selling and legendary Faith Martin.  I absolutely love every single one of her books.  I would definitely recommend these books and this author to other readers.  I can’t wait to read Faith’s next book.  The score on the Ginger Book Geek board is a very well deserved 5* out of 5*.