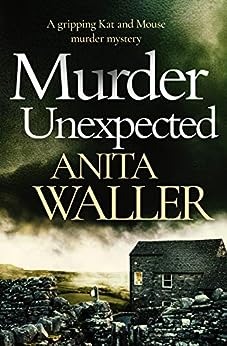 Church Deacon Kat and her friend Beth, known as Mouse, have started a private investigation business in the sleepy village of Eyam.

Kat, whose estranged criminal husband, Leon, is on the run, has a lot on her plate running the new business whilst heavily pregnant.

When a widow asks the sleuths for help, Kat and Mouse find themselves searching for the birth mother of the widow’s husband. But when it becomes clear that the widow isn’t telling the whole truth, Kat and Mouse are drawn into a deadly chase where nothing is what it seems.

Meanwhile, Kat’s husband has come back to Eyam and has Kat in his sights.

Can Kat and Mouse solve the case and escape the dangerous Leon?

This time they might just be out of their depth…

What can I say about Kat and Mouse?  They are one heck of a detective duo and they have established their own private investigation service.  Kat is a church deacon and people often find it easier to open up to her rather than somebody else.  Kat is heavily pregnant but the baby’s father, the horrendous Leon, is currently on the run from the authorities.  Kat is understandably concerned about where he is and what he is up to.  Mouse and her delightful sounding granny Doris try to ensure that Kat is not on her own and that her house is more secure than Fort Knox.  Leon has been keeping a watchful eye over Kat and when he twigs that she is pregnant he becomes obsessed with her and the baby.  Honestly, if I could have jumped inside the pages of the book to sort Leon out and chase him out of town then I would have done.  He made me so mad!!  Mouse just sounds lovely.  She is kind, supportive, compassionate, determined and often she is very stubborn.  Kat, Mouse and Doris are three kick ass ladies and they are a force to be reckoned with.  I certainly wouldn’t want to get on the wrong side of them.   This book sees the three ladies employed to find the birth mother of a woman’s dead husband.  Apparently it was her husband’s dying wish to find out about his birth mother.  However the three ladies have an inkling that there’s more to it than that.  Are they correct?  Well for the answer to that question you are just going to have to read the book for yourselves to find out as I am not going to tell you.

I thought ‘Murder Undeniable’ was good but blimey oh riley ‘Murder Unexpected’ blows the other book out of the water.  I was hooked on this book from the first word and reading the book then became an addiction.  I just couldn’t put the book down because I had to know what happened to Leon and I just had to know if there was more to the agency’s assignment than initially met the eye.  The pages seemed to turn with increasing speed and it didn’t seem to take me long at all to get through the story.  It was as if the book had a hold over me and it didn’t release me from its grip until the moment I closed the back cover.  I binge read the book over the course of a day, which is rather fast for me.

For me, ‘Murder Unexpected’ is extremely well written.  The author has a writing style that entices you in and keeps you there as it were.  The author uses such vivid descriptions that I could easily imagine that I was right there with Kat, Mouse and Doris and I was an invisible member of the team.  I loved the way in which the author has created these three strong female characters and I love the way in which they fit together and work together so well.  Each of the ladies has skills that the others don’t have and it’s easy to see why the agency is so successful.

In my opinion, ‘Murder Unexpected’ is well written, well plotted, the characters are believable and the storylines areextremely plausible.  This is the best book of the series so far and I have high hopes for the next book in the series.  Here’s hoping that we don’t have too long to wait.  I would definitely recommend Anita and her books to other readers.  The score on the Ginger Book Geek board is a very well deserved 5* out of 5*.