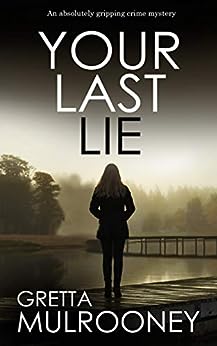 Pilot Greg Roscoe is found stabbed to death in his cockpit. His body has been mutilated.

Detective Tyrone Swift is hired by the pilot’s mother to investigate the death of her beloved son. But Greg wasn’t who she thought he was. He had a tangled personal life, with three wives and a history of adultery and risk-taking.

WHO WANTED HIM DEAD AND WHY?

The prime suspect was cleared by the police but Swift quickly puts together a list of people with a motive to kill Greg. And then Swift gets information from the deceased man’s troubled teenage daughter that may unlock the puzzle.

Can Detective Tyrone Swift get to the bottom of this tangled web of lies?

I have been a fan of Gretta’s for a little while now.  I love the series featuring Detective Tyrone Swift and I have developed something of a soft spot for him.  I couldn’t wait to start reading the latest book in the series called ‘Your Last Lie’, which was released on 7th February 2019.  I absolutely loved it but more about that in a bit.

What can I say about Tyrone Swift?  Apart from saying ‘where can I find him?’.  Tyrone used to be a police officer but he quit the Metropolitan Police following an incident.  He is still using his detective skills but in the private sector.  He has set himself up as a private investigator and he is rather successful at it.  He has a knack of getting information out of people that they wouldn’t necessarily give to the police.  Swift is a determined individual who is like a dog with a bone.  Once he gets his teeth into something, he isn’t easily shaken off or dissuaded from a course of action.  I imagine Swift to be tall, dark and ruggedly handsome.  He is also a dedicated father to a daughter who has hearing problems.  Swift worries about her and about the difficulties she is going to face in a hearing world.  Swift does have a girlfriend but to be blunt, she doesn’t deserve him.

Oh my goodness, ‘Your Last Lie’ is one hell of a read and then some.  I was hooked on this story from the moment I picked the book up right up until the moment I closed the back cover.  For me, the story hits the ground running and maintains the pace throughout.  The author’s writing style certainly entices you into the book and keeps you on the edge of your seat all the way through the story.  That’s what happened to me anyway.  I binge read this book in one sitting because I couldn’t bear to be parted from my Kindle.  The more I read, the more addicted to the story I became and the more I had to read.  The author uses such good descriptions that I felt as though I was a part of the story myself.  I know, I know it’s a work of fiction but if I find that I am enjoying a story I tend to ‘live’ the story as if it were real.  Reading this book felt like being on a slightly scary and unpredictable rollercoaster ride with no idea in which direction the story is going to take you next.  There were also several twists and turns to this story- some of which I was expecting and some of which I wasn’t expecting and which hit like me a punch to the gut.

In short, I absolutely loved this latest instalment of the Detective Tyrone Swift series.  I would definitely recommend this author and her books to other readers.  I can’t wait to read what Gretta comes up with next.  Here’s hoping that we don’t have too long to wait.  The score on the Ginger Book Geek board is a very well deserved 5* out of 5*.