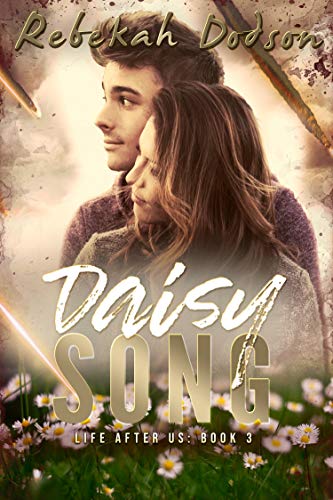 It wasn’t supposed to be like this. Seven months ago, Vicki Morel was supposed to be happy, not in the midst of the apocalypse. She and her fiancé, Will, should have been married and about to celebrate the birth of their child. Instead, she is on the run in fear for her life and the life of her baby. Her only hope is Ambrose—the man she truly loves.

Vicki entered Ambrose’s life like a bomb and blew everything apart. Just when he thought they could get out of this hell hole alive, she walked away. Or did she? After a cryptic message on a satellite phone, Ambrose is willing to risk it all to find her. Through a plane crash, escaping crazy doomsday preppers, and invading a military base, Ambrose and his band of survivors is determined to rescue Vicki. He wasn’t born a leader, yet the people follow him, determined to carve their own path in this world.

When everything ends, the daisy’s song promises a new beginning, a different life, and a fresh path in this altered world.

‘Daisy Song’ is the third book in the ‘Life After Us’ series.  I have read, reviewed and loved the two previous books (‘Poppy Bloom’ and ‘Lavender Dreams’) in the series and so I couldn’t wait to get my hands on a copy of the third book.  ‘Daisy Song’ was released on 12th February 2019.  It was well worth the wait as I really enjoyed it but more about that in a bit.

The characters in this book are a bit of a mixed bunch.   I did feel for Vicky in a way because she is desperately in love with somebody (Ambrose) but at the same time she was actually engaged to somebody else (Will) and she is expecting a child.  She had hoped that she would have been settled and eagerly awaiting the birth of her baby by now but the truth couldn’t be more different.  Vicky is actually on the run and in fear for her own life as well as for the life of her unborn child.  I certainly didn’t envy her in that respect.  I was keeping everything crossed that she would manage to escape her pursuers and that she would find her way back to Ambrose or that Ambrose would swoop in and rescue her.  Does that happen?  Well you are just going to have to read the book for yourselves to find out as I am not going to tell you.

‘Daisy Song’ was a fitting way in which to finish the series.  For me, this book was a traditional story in the sense that it was a tale of goodies versus baddies, which I loved.  This series was different to most of the stuff I read because it was more a dystopian/ science fiction book and I don’t normally read that genre.  They do say ‘a change is as good as a rest’ and I have to admit that I was pleasantly surprised by just how much I enjoyed ‘Daisy Song’ and the series overall.  The characters have evolved during the course of the series and I was interested to see how their own individual stories concluded.  I felt as though I had really got to know them and get an understanding for their personalities etc.  As I was so keen to know what happened to them, I soon became addicted to reading this book.  I sat down only intending to read a couple of chapters but I was so into the story and the characters that I just kept turning the pages.  When I first checked how much I had read, I was stunned to realise that I had read far more than any two chapters.  It didn’t seem to take me long at all to get through the story and I was so disappointed when I closed the back cover of the book for the final time.

In short, ‘Daisy Song’ was a thoroughly enjoyable and fitting end to the series.  I will definitely be reading more of Rebekah’s books in the future.  I would not hesitate to recommend this series to other readers.  The score on the Ginger Book Geek board is a very well deserved 4* out of 5*.