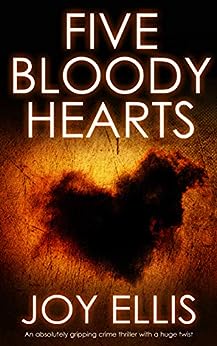 DETECTIVE MATT BALLARD’S LAST CASE MIGHT BE THE ONE THAT FINALLY BREAKS HIM.

Grace Repton, a beautiful older woman, walks into the police station to tell Matt she has information that could stop a murder. Her fiancé, the infamous serial killer Jeremy Reader, has told her that he has a disciple who is going to kill using Reader’s horrific methods.

Reader murdered five women and was finally brought to justice by Detective Ballard. Reader is safely imprisoned in a high security prison, and claiming to be a reformed man who wants to help the police.

But can Matt believe the serial killer or his peculiar wife to be? Can the love of a good woman really change a serial killer?

And the Fenland police also have another investigation on their hands. A Lithuanian migrant worker is found dead on the fens. There is no ID on him, but he has a Tree of Life tattoo. The third body to be found with this distinctive tattoo. Is this gang war or something even more sinister?

CAN YOU TRUST A KILLER TO HELP STOP A KILLER?

I have been a fan of Joy’s books for a while now.  I have read and loved every single book that she has released.  I read the synopsis for ‘Five Bloody Hearts’ and I knew that I just had to read it as soon as I could.  Oh my goodness me, ‘Five Bloody Hearts’ is one hell of a read, which I thorough enjoyed but more about that in a bit.

I must admit that I took to the character of Detective Chief Inspector Matt Ballard straightaway.  In fact by the end of the first couple of chapters, I felt as though I had been reunited with old friends in the shape of Ballard and his girlfriend, who used to be his Detective Sergeant Liz Haynes.  Ballard is counting down to retirement and to be honest, he can’t flipping wait.  He is just keeping his fingers crossed that nothing major comes in to the team in the run up to his retirement- which as we all know is just asking for trouble and it’s trouble that Ballard gets.  Ballard seems almost relieved to be on the brink of leaving the police service.  Ballard isn’t too sure about what he is going to do when he leaves.  His girlfriend was badly injured in the line of duty and it would appear that she is going to be retired on medical grounds.  She comes up with the idea of entering into a private investigation partnership with Ballard and the idea soon begins to grow on him.  Ballard is a career policeman, who leads from the front and he doesn’t ask anybody to do anything that he wouldn’t be willing to do himself.  Ballard is determined, stubborn, strong, feisty and he is thorough in his work.  Does Ballard solve his last major case?  Does Ballard survive his last case?  Well for the answers to those questions and more you are just going to have to read the book for yourselves to find out as I am not going to tell you.

As soon as I got to the end of the first page, I just knew that ‘Five Bloody Hearts’ was going to be one of those addictive and unputdownable books and so it proved to be.  I just couldn’t put the book down.  The book wasn’t exactly glued to my hand but it might as well have been because it came everywhere with me.  I thought that if I put the book down for any reason, I would miss out on some vital and crucial information.  I binge read this book over the course of a day.  I was so wrapped up in the investigation and the characters that I didn’t notice the speed with which I was getting through the story.  I was most disappointed to finish the book- not because I was disappointed with the ending as that couldn’t be further from the truth but I was enjoying the author’s writing style, the storylines and the characters so much that I just wanted the book to continue.

As with all of Joy’s books, ‘Five Bloody Hearts’ is superbly written.  The author has one of those convincing writing styles that entices you into the story, keeps your attention throughout, keeps you guessing, keeps you on the edge of your seat and she makes you feel as though you are a part of the story yourself.  That’s what happened to me anyway.  To say that I was right there with them seems something of an understatement.  I found that I was interacting with the book in the sense that I would suggest avenues to investigate as if Ballard could hear me.  I know, I know ‘Five Bloody Hearts’ is a work of fiction but if I enjoy a book then I tend to ‘live’ the story as if it were real.  I have a vivid imagination too which helps.

In short, ‘Five Bloody Hearts’ is one hell of a heart stopping and breath taking read.  Joy Ellis certainly has another bestselling winner on her hands with ‘Five Bloody Hearts’.  I look forward to reading more from the Ballard casebook.  Here’s hoping that we don’t have too long to wait.  I would have no hesitation in recommending Joy and her books to other readers.  The score on the Ginger Book Geek board is a very well deserved 5* out of 5*.