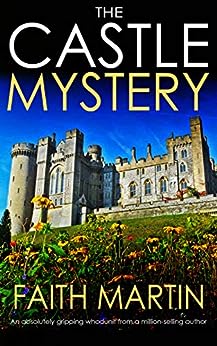 Jenny Starling has her dream job cooking for Lord and Lady Avonsleigh in a genuine castle.

Then one of the castle’s treasures, a fabulously jewelled dagger, is used to murder a staff member. The victim is found stabbed through the heart in the conservatory.

But how can Jenny solve this case when the murder was committed in front of several reliable witnesses, none of whom saw a thing?

What can I say about Jenny Starling?  Well for a start off she is a fantastic cook and she is also an ace amateur detective.  She often has more success than the police in closing a case, which doesn’t exactly go down well with the police.  Jenny is somebody who would intimidate me from the first moment I met her.  She is described as being very tall and she has a rather solid body type.  Jenny is tough, stubborn, plucky, determined, straight talking, polite but firm and she has a habit of picking up on certain clues or statements that most people wouldn’t be able to spot.  I hope that makes sense.  I love the way in which she swaps from being a cook to an amateur sleuth and back again.  Jenny finds what she considers to be her dream job in a castle, but it isn’t long before her detective skills are in demand again. ( Incidentally wherever Jenny goes, murder and mystery follows.  I wonder if she could be a serial killer…………….   She’s a bit like Jessica Fletcher in that respect).

‘The Castle Mystery’ is an easy and uncomplicated read, which is a bonus for me at the moment.  It didn’t take me long at all to get into this book and I felt as though I was reuniting with a friend in Jenny Starling.  In fact by the time I got to the end of the first page, I knew that this was going to be a book that I would be unable to put down and so it proved to be.  My book wasn’t exactly glued to my hand but it might as well have been because it came everywhere with me.  I became so wrapped up in the story, the author’s writing style and the characters that I couldn’t stop reading.  I felt as though I had become part of the story and I was acting as an amateur detective myself looking for clues.  I found that I was suspecting everybody and believing nobody.  Jenny Starling can rest easy though because my detective skills are not a patch on hers.  The woman is unstoppable.  I soon seemed to get through the story but I lost track of time and I didn’t realise just how long I had been reading.

I thoroughly enjoyed reading ‘The Castle Mystery’ and I would recommend Faith Martin and her books to other readers, but particularly to those readers, who enjoy cozy and uncomplicated mysteries. ‘The Castle Mystery’ reminded me of a game of Cluedo and there were distinct similarities between the characters in the game and the characters in this book.  I can’t wait to read what Faith comes up with next.  Here’s hoping that we don’t have too long to wait.  The score on the Ginger Book Geek board is a very well deserved 5* out of 5*.