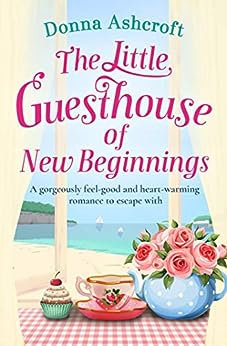 The Sunshine Hideaway, with its big bay windows, fresh-baked scones, and stunning view of Sunflower Island’s golden beaches, is the only place Madison Skylar has ever truly thought of as home. But returning to the guesthouse might not be as easy as she first thought…

Twenty-three-year-old Madison has been running away from the pain in her past, travelling all over the world trying to find happiness, yet her heart leads her back to her childhood home. When she arrives at The Sunshine Hideaway, she discovers the beautiful old building on the tiny island falling into disrepair. So Madison throws herself into transforming it into a stunning wellness retreat. Will this be enough to save the guesthouse, before it’s too late?

Handsome and mysterious Connor has lived on Sunflower Island his whole life. He works hard as a builder, with his faithful dog Jaws by his side, but something is missing and he dreams of bigger things. As Connor helps to revamp the guesthouse, he wonders if this could be his opportunity to tell the woman he’s secretly been in love with for years how he really feels…

As Madison embraces life on the close-knit island, sharing wine with old friends and ice-cream with quirky new neighbours, she also finds herself being drawn to shy Connor. Despite their clashes on how to paint the rooms and get ready for the grand re-opening, a heat is building between them.

But can opposites attract and find true love this summer? Or will their different personalities bring them heartache… and risk the future of the little guesthouse?

I have been a fan of Donna’s for a little while now and I have read and thoroughly enjoyed all of her previous books.  I couldn’t wait to read ‘The Little Guesthouse Of New Beginnings’.  Well the wait is now over as the book was released on 26th March 2019.  Overall I did enjoy reading it but more about that in a bit.

I love the way in which Donna creates characters that are both believable and realistic.  I think in some way we can all relate to at least one of her characters as we have all had similar experiences to those characters in the book.  In this book, the main character is Madison, who is aged 23 years old and she has been travelling the world in an attempt to escape her painful past but she always feels drawn towards her childhood home despite the pain it brings her.  I can totally understand where Madison was coming from in that respect because I have a painful past (quite literally) and no matter where I went in the country or the world I went, I still felt drawn towards home even though it held some painful memories.  I took to Madison from the start and I began to feel rather protective of her.  Mind saying that I did feel rather envious of her in the sense that she has an admirer in the shape of Connor, even if he is a bit of a grumpy get to start with.  I did think that perhaps his grumpiness was because he was painfully shy and he has had a crush on Madison for a long, long time.  Connor lives and works on the island and I got the impression that they have known each other for a long time.  A spark develops between the two and I was keeping everything crossed that their friendship developed into a full relationship.  Do they get together?  Well for the answers to that question and more you are just going to have to read the book for yourselves to find out as I am not going to tell you.

I have to be honest and say that it took me a little while to get into this book as it was a little slow to get going, but boy when I did finally get into the story, I just couldn’t get enough of it.  I felt compelled (in a nice way) to keep reading to discover how the story would pan out and if my hopes for Madison and Connor would be realised as it were.  After the start of the book, I binge read the book over a couple of days.  Reading this book did become addictive and at times I was extremely reluctant to put the book down for fear of missing out on something.  The pages turned over with increasing speed as I seemed to race to the end.  It didn’t seem to take me that long to get to the end of the book and I was so immersed in the story that I didn’t realise either the speed with which the time was passing or the speed with which the pages were turning.

In short, overall I did enjoy reading this book although for me it took a little while to get going.  ‘The Little Guesthouse Of New Beginnings’ is a good book but for me it isn’t Donna’s best book to date.  That said I would still recommend this book and this author to other readers.  The score on the Ginger Book Geek board is a very well deserved 4* out of 5*.