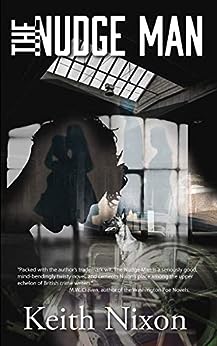 A washed up reporter, an escaped convict, a sociopathic gangster. All are hunting the Nudge Man…

Wheelchair bound, born again, ex-gangster, Eric Hennessey offers down on his luck reporter, Harrison Vaughan, a job. Track down the Nudge Man, a mysterious vigilante who’s stolen most of Hennessey’s money, ill-gotten gains which now Hennessey wants to use to do God’s work. Trouble is, Harry has no desire to work for a sociopathic murderer, even if he is an apparently changed man.

Harry is estranged from his family since a fabricated scandal destroyed his career. Hennessey tells Vaughan it was the Nudge Man who set him up for the fall. Find The Nudge Man and Harry has the chance for redemption and maybe even his family back.

However, Hennessey has another objective in mind. Unknown to Harry his family were taken into witness protection and had to cut ties with everyone after Harry’s son saw a murder – carried out by Eric Hennessey. Hennessey has been looking for them ever since and now may have a way in – Harry himself.

And others are on the trail of the Nudge Man, including the British government and an American secret service agent. Then there’s the lawyer who offers Harry £1m to stay away from The Nudge Man.

With more questions than answers and hapless guard dog Bonzo, whose bark is definitely worse than his bite, at his side Harry begins his search.

Can Harry find the Nudge Man and save his family? Or will Hennessey exact his revenge?

I have read, reviewed and loved a few of Keith’s books now.  I read the synopsis for ‘The Nudge Man’, which is the first in a new series featuring Harry Vaughan, and I just knew that I had to read it as soon as I possibly could.  All I can think on finishing the first book is ‘wow what a fantastic start to a series this is’.  I absolutely loved it.

As a lead character I did take to Harry.  He isn’t perfect but he doesn’t pretend to be and he is the first to admit that he has his faults.  He was a journalist but for one reason and another he fell from grace and his career was left in the gutter.  He is currently estranged from his family and he doesn’t realise what has happened to his family in his absence.  I did have to chuckle at some of the scrapes that Harry got himself into and particularly when he comes up against the large dog Bonzo. I can’t say that I warmed to many of the rest of the characters in this book, as most of them annoyed me in some way.  One of the characters that annoyed me the most was Hennessey who is about as two faced as they come.  Following an accident, Hennessey’s spinal cord was severed and he was left in a wheelchair.  He tells Harry that if he (Harry) finds ‘The Nudge Man’ Harry will find the man who wrecked Harry’s career and Harry might even get his career and his family back.  What Harry doesn’t realise is that Hennessey has an ulterior motive.  Hennessey is allegedly born again but in the words of Jim Royle from ‘The Royle Family’, ‘born again my a*se’.  Honestly if I had been in the same room as Hennessey, I would have been tempted to slap him in the face with a wet fish, poke him in the eyes with a sharp stick and/ or wheel him to the top of a very steep hill and just letting go of the handles of his wheelchair ensuring that the brakes were off, so he trundled down the hill with increasing speed and then with any luck he would literally be swimming with the fishes in the river that was hopefully at the bottom of the hill.  I know I sound very vindictive and cruel but Hennessey just winds me up something chronic.  Anyway that’s enough about my vindictiveness (is that even a word?) towards Mr. Hennessey.

It doesn’t take me long at all to get into Keith’s books and so it proved to be with ‘The Nudge Man’.  Keith has one of those great writing styles that draws you in and he dangles enough bait as it were to encourage you to keep reading.  I don’t mean that in a bad way- far from it.  I became addicted to reading ‘The Nudge Man’ from the first page onwards.  I just knew that this was one book that I would find unputdownable and so it would prove to be.  I don’t mean that the book was superglued to my hand but it might as well have been because it came everywhere with me.  I love the way in which Keith writes his books with a large dose of dry, gallows humour.  A couple of times, I nearly spluttered out a mouthful of my cup of tea because I read something witty or I was wanting to laugh at something I had just read.  Keith uses such vivid descriptions that I actually felt as though I was part of the story myself.  I seemed to charge through the book but because I was enjoying the story so much, I didn’t realise just how quickly the time was passing or how quickly the pages were turning.  I was most disappointed when I got to the end of the story.  I wasn’t disappointed with how the story ended but I was enjoying the story, the author’s writing style and the dry humour so much that I just wanted the book to continue on and on.

In short, I thoroughly enjoyed reading ‘The Nudge Man’.  It’s safe to say that Keith Nixon has a book that is surely going to be a bestseller and that is nothing less than he deserves.  I look forward to reading further books in the series featuring Harry Vaughan.  Here’s hoping that we don’t have too long to wait.  I would definitely recommend this author and every single one of his other books to other readers.  The score on the Ginger Book Geek board is a very well deserved 5* out of 5*.