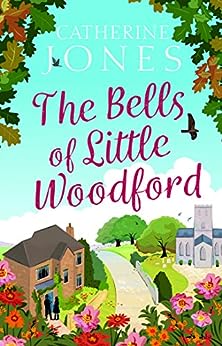 The town of Little Woodford seems peaceful and picture-postcard beautiful, with its marketplace, ancient church and immaculate allotments. But behind the tranquil facade, troubles are brewing.

Olivia Lewthwaite, former town councillor, pillar of the WI and all-round busybody, has been forced by her husband’s gambling debts to sell their house – her pride and joy. She hates the new estate they’ve moved to and knows she needs to humble herself to apply for a job.

To make matters worse, a thoroughly disagreeable woman has bought Olivia’s beloved Grange and sets about objecting to everything she can, from the ringing of the church bells, to the market stall selling organic local meat.

It isn’t long before the town is in turmoil.

I love discovering new authors and I must admit that I haven’t come across Catherine Jones before.  Well, let’s just say I certainly know about her now and I realise just what it is that I have been missing.  When I agreed to take part in the blog tour for ‘The Bells Of Little Woodford’ I didn’t realise that it was actually the second in the Little Woodford series.  Not that that matters because it reads perfectly well as a standalone.  I absolutely loved reading ‘The Bells Of Little Woodford’ but more about that in a bit.

I absolutely loved the very varied and diverse cast of characters in this book.  I can’t say that I had a favourite character as I thought that there were all interesting in their own way.  To me, the cast of characters in this book is representative of the characters that you would find in any large village or small town.  I actually live in a village that has become more like a town due to development.  Throughout reading this book I found myself nodding and comparing the various characters to people that I know from my own village.  The shenanigans that the different characters got up to in the book were similar to the shenanigans that people from my village get up to.  I won’t divulge any more about the different characters from my village as I wouldn’t want to be sued for libel!!  Some of the characters make me laugh whilst some of the characters made me want to slap them silly with a wet fish.

The story in ‘The Bells Of Little Woodford’ starts with a bang quite literally, which grabbed my attention straightaway.  The pace of the book is rather gentle but definitely not slow and it didn’t make any difference to my enjoyment of the book.  I soon became addicted to reading this book as my desperation to find out what else happened to the townsfolk became ever that bit more intense.  I admit that I am a nosy parker and I love a bit of gossip.  Reading this book certainly felt like I was snooping into other people’s lives and realising that compared to the characters in the book, I am actually almost normal.  Hurrah.  I found it almost impossible to put the book down and if I did have to put the book down then I would immediately look forward to that time when I could pick the book up again.  I was loving the book so much that I didn’t realise the speed with which the time was passing or the speed with which the pages were turning.  I was most unhappy to realise that I had got to the end of the book.  I was enjoying everything about the book so much that I just wanted the book to continue.

In short, I thoroughly enjoyed this snapshot of town/ village life and I would definitely recommend this book to other readers.  Although I was sad to finish ‘The Bells Of Little Woodford’, I soon perked up when I realised that I had another book in the Little Woodford series to read.  The first book in the series is called ‘Little Woodford’ and the paperback was released towards the end of last year.  I will most definitely be buying a copy and reading it just as soon as I can.  The score on the Ginger Book Geek board is a very well deserved 5* out of 5*.