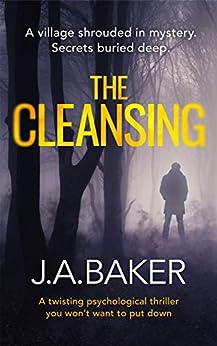 When Ray moves to a new house in the village of Whitchurch, he leaves behind a relationship and a luxury apartment in search of a better life in the countryside.

However, he soon realises that sleepy Whitchurch also has its own fair share of problems. Last year, a woman’s body was discovered in the woods nearby. The killer was never caught.

Soon suspicious things start to happen. Threatening letters are sent, cars are vandalised and headstones are desecrated. But who is responsible for these acts and why?

As the tension in the village builds, Ray begins to feel the pressure. Someone is out to cause trouble and that someone might be closer to Ray than he ever imagined.

I have been a fan of J. A Baker now for a  little while now.  She writes psychological thrillers that can play havoc with your mind.  I read the synopsis for ‘The Cleansing’ and it caught my interest.  I couldn’t wait to dive in and start reading.  Oh boy, ‘The Cleansing’ was one hell of a read and then some.  I absolutely LOVED it but more about that in a bit.

I have to admit to being a bit suspicious of Ray from the start.  There was just something about him that set little alarm bells ringing for me.  That could just be me believing nobody and suspecting everybody of course.  I did wonder if he was telling us the full truth about why he made the sudden move so far North.  After all, we were only getting to hear one side of the story- his side of the story.  Ray is a bit two sided in his personality.  By that I mean that he puts on a face for the general public but every so often something irks him and a whole different side to him comes out into the open.  I have to admit that I didn’t take to Ray at all but that’s not a bad thing.

Oh my word, ‘The Cleansing’ was one seriously well written and well plotted book.  I was hooked on this book from the moment I read the synopsis, never mind from when I began to read the book itself.  Reading ‘The Cleansing’ became seriously addictive ad I found it almost impossible to put the book down.  I think that I feared that I would miss out on something if I put the book to one side.  I also felt compelled (in a nice way) to continue reading to see if my suspicions proved to be correct and to get an idea of what the true picture actually was.  I can honestly say that this book certainly kept me guessing all the way through and it kept me on the edge of my seat.  There were more twists and turns to this story than you would find on a Snakes & Ladders board.  Some of the twists I saw coming and other twists crept up on me and left me feeling as though I had been punched in the gut knocking the breath out of me.

The author has one of those writing styles that draws you in and closes in around you.  You don’t realise what is happening until later on, by which time you are that into the story and you have such a desperation to find out what happens that you don’t want to escape.  I hope that makes sense- well that’s what happened to me anyway.  For me, the story hits the ground running and maintains the pace throughout.  The chapters are mainly written from Ray’s point of view but there are occasional chapters which are written by ‘Me’, who is a rather enigmatic character and whose identity isn’t revealed until towards the end of the book.  This way of telling the story really works, the chapters interlink really well and the story flows seamlessly as a result.

I also love the setting of the bulk of the story in County Durham, which is where I live.  The story mainly takes place in a small village just outside of Durham itself.  The author has perfectly captured the attitude that long term residents of a village show towards ‘newcomers’ and the way in which the atmosphere falls silent when a stranger walks into the pub.  Newcomers are viewed with more than an air of suspicion and their movements are closely monitored.

In short, J. A Baker has done it again.  She has written another book that is sure to soar towards the top of the bestseller charts, which is nothing less than it deserves.  I can’t wait to read what the author comes up with next.  I would definitely recommend this author and her books to other readers.  The score on the Ginger Book Geek board is a very well deserved 5* out of 5*.