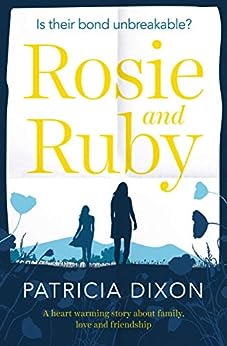 Is their family bond unbreakable?

Ruby lives one-step away from poverty on a rundown, crime-infested estate in Manchester, with Stella, her feckless, self-centered a mother.

In the quiet suburbs of Cheshire Rosie, Ruby’s cousin leads a charmed, middle-class existence but feels suffocated by her domineering mother Doreen.

Although Stella and Doreen have little in common, they share the inability to show the love and loyalty that their daughters deserve.

Meanwhile, Olivia, a member of the elite Cheshire set, is aloof and distant, rattling around in her sprawling mansion, attending charity functions and hosting infamous bridge nights.

Her errant son Marcus lives his life in the fast lane, maximising the perks of the family firm whilst enjoying his jet setting bachelor existence, well away from the watchful eyes of his disapproving mother.

But when Ruby meets Marcus her life begins to crumble and one by one the secrets she has kept are exposed.

Can Rosie and Ruby’s bond survive? And in Ruby’s hour of need, will her cousin keep her promise, and come to her rescue?

I became a fan of Patricia’s books when I was invited to take part in the blog tour for ‘Death’s Dark Veil’.  I thoroughly enjoyed it and I resolved to catch up with Patricia’s other books just as soon as I could.  When I received the synopsis for ‘Rosy & Ruby’, I must admit that I was intrigued, not only by the plot but I was interested to discover if Patricia could write light hearted, feel good books as well as she writes the dark and moody psychological thrillers.  Well folks, having read ‘Rosie & Ruby’, I can definitely say that Patricia Dixon is a fantastic author who can write dark psychological thrillers just as well as she writes light hearted feel good type stories.  I absolutely loved ‘Rosie & Ruby’ but more about that in a bit.

I loved both characters and took to them from the start.  We first meet them when they are teenagers and from the start it is clear that they are both from two very different backgrounds but they do have certain things in common.  Both are only children but they share an extremely close relationship.  They really are as close as siblings.  Ruby comes from a very poor background and lives on a crime ridden estate in Manchester.  Her mother will definitely never win any parenting awards.  Ruby’s Mam seems rather fond of the alcoholic beverages and she has a poor choice in men, which has on occasion placed Ruby in danger.  Ruby lives for the time that she spends with her best friend and cousin Rosie.  Rosie’s family are from the other end of the scale in that they have wealth and they live in a very desirable area.  Rosie’s Mam is a bit of a nightmare too because she has Rosie’s life all planned out for her and that’s without asking Rosy what it is she wants from life.  Rosie rebels somewhat and she takes a stand for what she wants.  Ruby and Rosie share similar personality characteristics.  Both are feisty, strong, determined, stubborn and plucky young women.  I was hoping that everything would work out well for them in the end and I kept everything crossed that this would happen.  I hope that that makes sense.

‘Rosie & Ruby’ is brilliantly written.  Patricia has one of those writing styles that entices the reader in right from the very beginning.  She writes so realistically that she makes you feel as though you are part of the story yourself.  That’s how she made me feel anyway.  I found that I drew parallels between the lives of Rosie and Ruby and the lives of myself and my cousin.  Me and my cousin are only children and for a long time we had that sort of relationship that siblings have and we spent most of our time together one way and another.  The story is told in different periods of time.  We meet the girls in the past when they were children and then as time moves on, we keep popping in on the lives of Rosie and Ruby.  I did think that initially this might prove confusing but it really isn’t.  This way of telling the tale works really well and the story flows seamlessly as a result.

Oh my word, ‘Rosie & Ruby’ is one of those books that really got to me from the start.  I don’t mean that in a bad way far from it.  As I mentioned above, I drew parallels between the lives and Rosie & Ruby and those of me and my cousin, although thankfully our mothers were not the nightmare that Rosie and Ruby’s mothers were.   I made the mistake of starting this book shortly before bedtime and let’s just say I was super tired the following morning because I refused to be sensible and switch the light off. I soon became addicted to reading this book and it got to the stage where the world could have ended and I wouldn’t have realised because I was so focused on the book.  I flew through the latter half of the book because I had to know if things worked out well for Rosie and Ruby.  The more I read, the more I wanted to read and the quicker the pages seemed to turn.  I was most disappointed when I realised that I had finished the book.  I don’t mean that I was disappointed with how the book ended- far from it- but I was enjoying the author’s writing style, the storyline and the characters so much that I just wanted the book to continue.

I have to say that Patricia is one hell of an author and she can definitely write brilliantly in whichever literary genre she turns her hand to.  I can’t wait to read what she comes up with next.  I will definitely be recommending her and her books to other readers.  The score on the Ginger Book Geek board is a very well deserved 5* out of 5*.