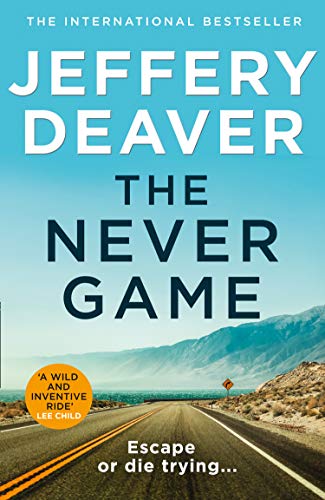 A student kidnapped from the park.
Nineteen-year-old Sophie disappears one summer afternoon. She wakes up to find herself locked inside a derelict warehouse, surrounded by five objects. If she uses them wisely, she will escape her prison. Otherwise she will die.

An investigator running out of time.
Sophie’s distraught father calls in the one man who can help find his daughter: unique investigator Colter Shaw. Raised in the wilderness by survivalist parents, he is an expert tracker with a forensic mind trained to solve the most challenging cases. But this will be a test even for him.

A killer playing a dangerous game.
Soon a blogger called Henry is abducted – left to die in the dark heart of a remote forest – and the whole case gets turned on its head. Because this killer isn’t following the rules; he’s changing them. One murder at a time…

I have a huge and very embarrassing confession to make.  Although I have all of Jeffery Deaver’s books on my ever increasing ‘To Be Read’ mountain, I haven’t actually read one of them yet.  I fully intended to read them but I just haven’t had the time….until now that is because I have literally just finished reading his latest book called ‘The Never Game’.  In every negative there is a positive though because now I have discovered how much I enjoy Jeffery’s work, I can guarantee that his other books will not be on that ‘TBR’ mountain for very much longer.

I wasn’t exactly sure how to take Colter Shaw and I found him a little hard to warm to.  He’s one of the most unique investigators that I think I have come across.  He is a sort of bounty hunter in that he goes after the cases which promise a reward.  I did wonder if he was a money grabber and that he wasn’t bothered about his cases.  As the book continued and I got to know Shaw a bit better, I realised that yes the money might be what first attracts him to a case but he genuinely cares about those he tries to find.  Don’t call him a private investigator though because he will not hesitate to put you straight.  Shaw has a knack of being able to get information from people who would not necessarily talk to an investigator- either police or private.  Shaw is a determined, stubborn, highly intelligent, sneaky, crafty, feisty man.  Shaw also puts everything he has into a case and he has a way of getting results.

Oh my word, ‘The Never Game’ was a really interesting read and a fantastic introduction to Jeffery’s work.  I was hooked from the moment I read the first sentence and woe betide anybody who tried to prise the book out of my hands because they would have been given short, sharp shrift.  I found ‘The Never Game’ to be simply unputdownable.  The book wasn’t exactly glued to my hand but it might as well have been because it came everywhere with me.  The book seemed to have a hold over me and I feared that if I put the book down for just a second I might miss something or I might break the hold the book had over me.  I seemed to charge through the book but I was so focused on the story, the characters and the storylines so much that I noticed neither the speed with which the time was passing nor the speed with which the pages were turning.  I was stunned to reach the end of the book far quicker than I had anticipated.

For me, ‘The Never Game’ is brilliantly written.  The author grabs your attention from the start and he dangles enough bait to keep your interest and to keep you on your toes all the way through the book.  That’s what happened to me anyway.  The author’s writing style is easy to get along with and easy to get used to.  He uses such powerful and vivid descriptions that I really did feel as though I was part of the story myself- sort of like Shaw’s right hand woman.  I found that I was looking for little clues myself and I found that I began to interact with the book.  Before anybody jumps and tries to remind me that ‘The Never Game’ is a work of fiction, yes I know all that but if I enjoy reading a book as much as I enjoyed ‘The Never Game’, I tend to live the story as if it is real.

Reading ‘The Never Game’ felt like being on a rather scary and unpredictable rollercoaster ride with more twists and turns than you would find on a ‘Snakes & Ladders’ board.  On a couple of occasions, I smugly thought that I had fathomed out who had done what and why, only to be thrown a curve ball and I realised that I had got the wrong end of the stick and I was sent down another path entirely.

In short, I thoroughly enjoyed reading ‘The Never Game’ and I would definitely recommend it to other readers.  I can’t wait to read the next book in the Colter Shaw series.  I will most definitely be reading Jeffery’s other books just as soon as I can.  The score on the Ginger Book Geek board is a very well deserved 5* out of 5*.